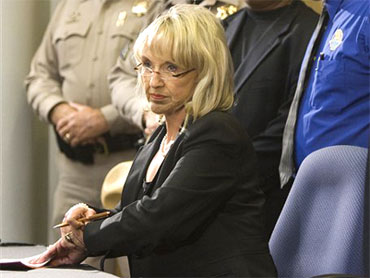 In a column released online today, the Washington Post's Dana Milbank noted that Arizona Republican governor Jan Brewer, a strong proponent of her state's controversial immigration bill, has claimed that Arizona's "law enforcement agencies have found bodies in the desert either buried or just lying out there that have been beheaded."

As Milbank noted, the Arizona Guardian checked that claim out and found no evidence of beheadings; Brewer's office did not respond to a request from the columnist for documentation for the beheading claim.

Hotsheet today asked the governor's office to offer evidence for the claim; like Milbank, we received no response. The governor is in Boston at the National Governors Association's annual summer meeting today; we will update this post if Brewer's office responds.

In his column, Milbank cast Brewer's claim as part of a misinformation campaign by the governor and Sen. John McCain to scare Arizonans and Americans into thinking violence from illegal immigration is worse than it actually is.

"Brewer's mindlessness about headlessness is just one of the immigration falsehoods being spread by Arizona politicians," he wrote. "Border violence on the rise? Phoenix becoming the world's No. 2 kidnapping capital? Illegal immigrants responsible for most police killings? The majority of those crossing the border are drug mules? All wrong."

He added: "Two months ago, the Arizona Republic published an exhaustive report that found that, according to statistics from the FBI and Arizona police agencies, crime in Arizona border towns has been 'essentially flat for the past decade.' For example, 'In 2000, there were 23 rapes, robberies and murders in Nogales, Ariz. Last year, despite nearly a decade of population growth, there were 19 such crimes.' The Pima County sheriff reported that 'the border has never been more secure.'"