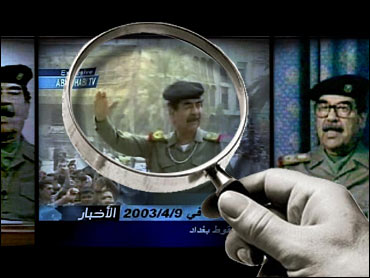 Are our great enemies dead or alive? In his latest Against the Grain commentary, CBSNews.com's Dick Meyer wonders if he's the only one who still wants to know.

Pardon me for beating a dead – or alive – horse, but what's the deal with Saddam Hussein? Is he dead? Is he alive? If he's alive, any hints about where he might be? Are we getting warmer? Colder?

And by the way, what about Osama bin Laden?

Asking the big, fat obvious questions appears to be a violation of civil etiquette in George Bush's Emerald City, a place where Republican dreams really do come true -- lately.

Or maybe it's just journalistically uncool to ask – like if you have to ask you're just so out of it. Well, count me out of it.

I want to know, dammit. And so does everyone I know who's not in the know. Even some in the know admit to not knowing and wanting to know.

Having Saddam and Osama become the Butch Cassidy and Sundance Kid of global terrorism strikes most people as a fairly bad idea.

But beyond pure curiosity, the questions about public enemies number one and two get at issues about the use and abuse of U.S. intelligence that have been looming since September 11, 2001. The whereabouts of Saddam and Osama are just the biggies at the top of a long list.

Where are Saddam's weapons of mass destruction?

This week Secretary Rumsfeld suggested for the first time that Iraq may have destroyed it biological and chemical arms before the war started. If so, was the war in fact necessary? Do we know that W.M.D. were destroyed, or are we just guessing? Did we ever know they existed, or were we just guessing? Was the intelligence about W.M.D. cooked to help justify an invasion?

Where is al Qaeda?

We've now imposed "regime change" (still one of the better euphemisms of this young century) in the two countries we were told were leading state-sponsors of terror – Afghanistan and Iraq. That didn't seem to stop al Qaeda from blowing bits of Riyadh and Casablanca to smithereens. Was Iraq a serious source of support for al Qaeda? Is there a next step in the battle against al Qaeda?

These questions all point to one more: Where is the CIA?

Shrouded by secrecy and protected by post-9/11 paranoia, the CIA was spared the kind of grilling that many expected after the unforeseen tragedy. Iran-Contra and the space shuttle explosions received more intensive, high profile post-mortems than did the role of U.S. intelligence and national security agencies in 9/11. It's extraordinary.

Will we send troops left from Iraq into Syria or right into Iran because of "intelligence"? In a May 29 CBS News poll, 69 percent think it is very or somewhat likely the U.S. will take military action against Iran.

The spies and their bosses avoided high profile, competent scrutiny after 9/11. They must not be allowed to pull the same trick again after the war with Iraq.

And I'm sorry to be uncool, but I'd like some answers to the big questions of what happened before buying off on a new set of answers about what we're to do next.