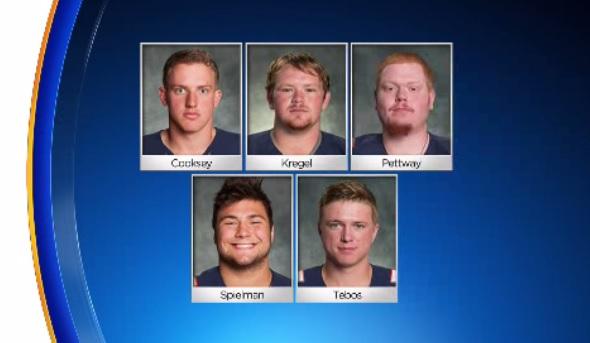 A judge has signed arrest warrants and set $50,000 bonds for the players, who were expected to turn themselves in this week.

Details about the alleged hazing were not immediately available.

The Chicago Tribune reports the alleged victim, a freshman at the time, told police he was in his dorm room when the five duct-taped his hands and feet, put a pillowcase on his head, threw him in a car, attempted to sodomize him with an object and then dumped him half-naked in an off-campus park.

Wheaton College said in a statement that other players and members of the coaching staff in March 2016 alerted college officials to an "incident."

"The College took swift action to initiate a thorough investigation," the statement says, in part. "Our internal investigation into the incident, and our engagement with an independent, third-party investigator retained by the College, resulted in a range of corrective actions. We are unable to share details on these disciplinary measures due to federal student privacy protections."

Wheaton College is reviewing its anti-hazing policies, the statement said.

"We are profoundly saddened that any member of our community could be mistreated in any way," it said.