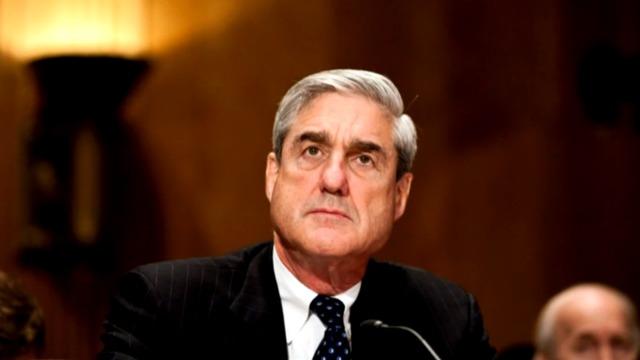 It was one year ago Thursday when Robert Mueller, the former FBI director, was appointed as special counsel to take over the Justice Department's investigation into possible coordination between Russia and Donald Trump's 2016 presidential campaign. The 12 months since have yielded a flurry of criminal indictments and guilty pleas, tense court appearances, angry tweets from the president and speculation over what the ever-taciturn Mueller already knows and what he'll investigate next.

President Trump himself commemorated the occasion on Twitter Thursday morning, tweeting "Congratulations America, we are now into the second year of the greatest witch hunt in American history ..."

Hundreds of pages of court filings, and public statements from witnesses, have to an extent pulled back the curtain on an extraordinarily secretive investigation. But much remains hidden from view.

A look at the last year and what may lie ahead:

What is Mueller investigating?

There's no doubt Mueller's investigation is far reaching, but at its core, prosecutors have remained focused on two central questions:

Did the Trump campaign collude with the Kremlin to tip the 2016 presidential election in the Republican candidate's favor?

And has President Donald Trump tried to obstruct the investigation since taking office through actions including firing FBI Director James Comey and badgering Attorney General Jeff Sessions over his recusal from the Russia probe?

Who has been questioned so far?

A veritable who's who of current and former White House officials, as well as foreign businessmen and top campaign and transition staffers.

In a reflection of the wide-angle nature of the investigation, and its ongoing examination of foreign influence on the Trump administration, a grand jury in Washington has heard from a Lebanese-American businessman who joined a 2016 meeting at Trump Tower involving top Trump aides and the crown prince of Abu Dhabi.

A Russian American lobbyist who attended a June 2016 meeting at which Trump's eldest son expected to receive damaging information about his father's opponent, Hillary Clinton, also has provided testimony.

Who has been charged?

A total of 19 people and three Russian companies have either been indicted or pleaded guilty to criminal charges.

Among those charged are Trump campaign chairman Paul Manafort, who is awaiting trial in Virginia and the District of Columbia, and Flynn, who pleaded guilty in December to lying to the FBI and has been cooperating with Mueller's investigation. Other cooperators include deputy campaign chairman Rick Gates and former campaign foreign policy adviser George Papadopoulos.

Alex van der Zwaan, a Dutch lawyer who lied to the FBI is serving a 30-day prison sentence for lying to special counsel prosecutors and the FBI, and a California man who unwittingly sold bank accounts to Russians has also pleaded guilty.

The single largest criminal case involves 13 Russians and three Russian companies, accused of conspiring together to fund a hidden but effective social media campaign to exploit American divisions on race and other hot-button topics as well as favor Trump over Clinton.

What have we learned so far?

The criminal cases so far have not resolved the core question of Trump-Russia collusion, but they have revealed a determination by Russians to put Trump in office, and they've exposed the sometimes-shadowy foreign entanglements maintained by Trump aides before, during and after the campaign. They've also underscored how Trump associates were aware of Russian outreach efforts during the campaign and how at least one believed Russia to be in possession of compromising information on Clinton.

An indictment against Manafort and Gates, for instance, accused them of working as foreign agents for Ukrainian interests and funneling millions of dollars from the work into offshore accounts used to fund lavish lifestyles.

Charging documents in Papadopoulos's case make clear that during the presidential campaign he was told by a professor who claimed powerful connections to the Kremlin that Russia had dirt on Clinton in the form of thousands of emails.

And Flynn's guilty plea revealed how, contrary to public assertions from the White House, the incoming national security adviser did indeed discuss sanctions with the then-Russian ambassador, Sergey Kislyak, during the transition period.

What's yet to come?

The biggest unresolved question is whether Mr. Trump will sit for an interview with Mueller -- and what will happen if he does not.

Mr. Trump at times has expressed a desire to be questioned by the special counsel team, though his mood toward the investigators soured considerably following an April 9 raid targeting his personal lawyer, Michael Cohen -- an offshoot investigation in New York City that poses its own legal peril for the president.

Mueller has dozens of questions he'd like to put before the president, largely focused on obstruction but also on the underpinning issue of possible campaign collusion.

The legal team initially said it hoped to make a decision on an interview by May 17, the one-year mark, but lawyer Rudy Giuliani told CBS News he hopes to have a final decision about whether Mr. Trump will sit for an interview with Special Counsel Robert Mueller before the president heads to Singapore for the highly anticipated North Korea summit in mid-June.

The president's personal attorney recently told CBS News correspondent Paula Reid that Giuliani suggested to Mueller a sitting president cannot be indicted, and Mueller expressed his uncertainty over that claim. But Mueller's assistant subsequently followed up with Giuliani and told him the special counsel is bound by a Department of Justice memo saying a sitting president cannot be indicted, according to Giuliani.

If Mr. Trump does say yes, look for his legal team to try to aggressively narrow the scope of questioning and limit the time of any sit-down. If he says no, Mueller may take the extraordinary step of seeking a grand jury subpoena to force his testimony, though such a move could prolong the investigation by many months and may end with a fight before the U.S. Supreme Court.

Giuliani has previously asserted that the president doesn't have to comply with such a subpoena from the special counsel's office and instead "can assert the same privileges other presidents have." The Washington Post first reported that Mueller had told the president's lawyers in March that Mr. Trump might be subpoenaed if he does not agree to answer investigators' questions.

Looking ahead, the special counsel's office is expected to last well into next year and will stay open through the end of the Manafort case and/or any other case it brings.  The first prosecution of Manafort will start in July and the second trial will be held in September.  The second trial is expected to last at least three weeks.  After a verdict the proceedings are unlikely to wrap-up before the end of the year.

What happens if Mueller finds wrongdoing by the president?

The end game is unclear.

Mueller will be expected to report his findings to Deputy Attorney General Rod Rosenstein, the Justice Department official who appointed him. A report of his conclusions may then be passed onto Congress, but it's not clear when or how much of Mueller's work will be revealed to the public.

If Mueller decides charges against a sitting president are supported by evidence, it will be up to Rosenstein to decide whether to refer the matter to congress or do nothing and stick the recommendation in a drawer.

Rosenstein has publicly said he does not believe a sitting President can be indicted. Giuliani says Mueller believes the same, but even if Mueller wants to indict, Rosenstein is his boss and approves all charges.  Depending on the outcome, it is possible Congress could use the findings to start impeachment proceedings -- especially if Democrats take control in the midterm elections.

Justice Department legal opinions from 1973 and 2000 have suggested that a sitting president is immune from indictment and that criminal charges would undermine the ability of the commander in chief to do the job. Mueller would presumably be bound by that conclusion.

What has Mueller said about all this?

Absolutely nothing. Mueller, never known at the FBI as especially gregarious or verbose, has not spoken publicly about his work since his appointment, nor is he likely to.

The only speaking his attorneys have done has been in court and through detailed charging documents. It's unclear how much longer the investigation will last, but it's more likely than not that Mueller and his team have a sense of where they're taking it.

Comey, who succeeded Mueller as FBI director and whose firing led to his appointment as special counsel, has said investigators who spend a year digging into something are "incompetent" if they don't know where their case is heading.