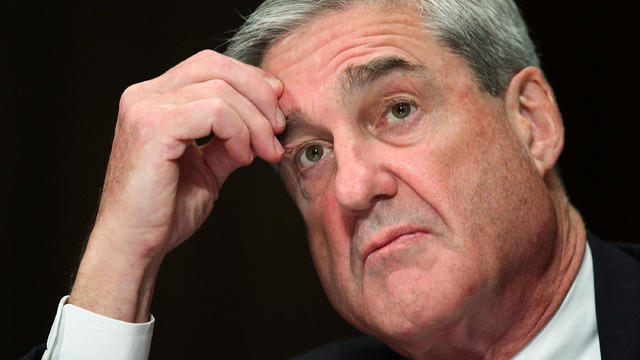 Last month, White House Press Secretary Sarah Sanders said that Mr. Trump "certainly believes" he has the power to fire Mueller. "We've been advised that the president certainly has the power to make that decision," she told reporters.

Sanders' statement prompted a certain amount of head scratching in Washington, since it was generally understood that only Deputy Attorney General Rod Rosenstein could fire Mueller after Attorney General Jeff Sessions recused himself from the case, and then, only for "good cause." Supreme Court decisions going back to 1839 would also indicate that government employees can only be fired by the person who appointed them.

So Mr. Trump could order Rosenstein to fire Mueller, but Rosenstein could resign instead of doing it. Mr. Trump could then keep firing Rosenstein's successors until he found someone willing to dismiss Mueller, which is essentially what President Nixon did in his "Saturday Night Massacre" of 1973.

The move backfired on Nixon and set in motion a chain of events that culminated in his resignation, which partly explains why Republican senators had seemed confident that Mr. Trump won't try to remove Mueller. But what Sanders said was that Mr. Trump could just go around Rosenstein and fire Mueller directly.

Meanwhile, the president is once again registering his disapproval of Mueller's investigation, once again calling it a "witch hunt" in a series of tweets Tuesday morning. Mueller has provided Mr. Trump's legal team with a list of nearly four dozen questions for the president. The questions were then leaked to the press, prompting Mr. Trump's Tuesday tweet storm.

This is where it gets tricky, because there's some debate among legal scholars on the issue. The most legally safe way for the president to fire the special counsel is to order Rosenstein and, if need be, his successors to do it. Still, it's something of an open question as to whether Mr. Trump can sidestep that process and just fire Mueller himself.

If the president decided he wanted to fire Mueller, one thing he could theoretically do is rescind the regulation that governs the special counsel's appointment. But Neal Katyal, a former acting solicitor general who helped write the current regulation, said on Twitter that Mr. Trump doesn't have the power to rescind it.

Scott L. Fredericksen, a former federal prosecutor, agrees that Mr. Trump doesn't have the authority. "I think that would be unwise, if only because he's going to expose himself to inevitable litigation challenging his power to unilaterally rescind the regulation," Frederickson told CBS News.

For his part, Rosenstein has said the regulation does apply to Mueller, meaning only he can fire the special counsel, and only for good reason. In theory, however, the president could disagree and insist that he can fire Mueller directly.

"I agree that the proper and most legally sound route would be to order Rosenstein to dismiss Mueller and then fire him if he doesn't comply," Jack L. Goldsmith, who led the Office of Legal Counsel under President George W. Bush, told the New York Times.

So he might be able to fire Mueller directly?

Experts disagree on the issue, in part because it's never been done or really even contemplated much until recently.

"We're in somewhat uncharted territory...one can certainly fashion that argument that the president has complete power in the executive branch and can do whatever he darn well pleases," Fredericksen said. "I think the better argument, though, is that he is bound by the regulation in place governing the appointment of Mr. Mueller, that he doesn't have unfettered discretion to do whatever he wants. But there is disagreement over that."

In a recent blog post, former Deputy Assistant Attorney General Marty Lederman, who served in the Obama administration, argued at length that Mr. Trump does not have the power to fire Mueller directly.

"I'd be very surprised if [Mr. Trump] purports to remove Mueller," Lederman wrote. "And if he does so, Mueller surely knows that [Mr. Trump] lacks such authority. Therefore, he might well respond as Secretary of War Edwin Stanton did when President Andrew Johnson purported to remove him in violation of a statutory restriction–namely, refuse to leave his office and continue performing his functions."

Another idea that's been floated is that Mr. Trump could use the Federal Vacancies Act of 1998 to fire Rosenstein and replace him with someone willing to fire Mueller. According to that law, in the event of a vacancy, the president can appoint someone who's already been confirmed by the Senate, such as a loyal cabinet member, as a temporary replacement.

However, it's unclear if it would be applicable in situations where the president has created the vacancy by firing someone. And if Mr. Trump is dead set on finding someone willing to carry out an order to fire Mueller, someone like that might appear somewhere down the Justice Department's line of succession. Nixon, for example, had to fire both his attorney general and his deputy attorney general before finding someone willing to fire the Watergate special prosecutor, which turned out to be then-Solicitor General Robert Bork.

Is Congress trying to do anything to remedy all this?

When Sanders suggested Mr. Trump did have the right to fire Mueller,  Republican Sens. Thom Tillis and Lindsey Graham teamed up with Democratic Sens. Chris Coons and Cory Booker to introduce legislation aimed at protecting Mueller. The legislation would allow Mueller to seek an expedited judicial review of his firing. The review would then determine whether he was fired for good cause.

Last week, Majority Leader Mitch McConnell announced that the Senate would not be voting on the bill, although Sen. Chuck Grassley, the chairman of the Senate Judiciary Committee, allowed his committee to vote on the legislation anyway. The bill was advanced by the committee last week.

Lawmakers have also been privately and publicly warning Mr. Trump not to fire Mueller.

"It would be suicide for the president to want to talk about firing Mueller," Grassley recently told Fox Business Network. "The less the president said on this whole thing, the better off he would be, the stronger his presidency would be."

And last month, conservative pundit Erick Erickson published a profanity-laced screed by an anonymous Republican congressman who, at one point, said that firing Mueller could lead to Mr. Trump's impeachment.

"Judiciary is stacked with a bunch of people who can win re-election so long as they don't p*** off Trump voters in the primary," the unidentified lawmaker said. "But if we get to summer and most of the primaries are over, they just might pull the trigger if the president fires Mueller. The s** will hit the fan if that happens and I'd vote to impeach him myself. Most of us would, I think. Hell, all the Democrats would and you only need a majority in the House."