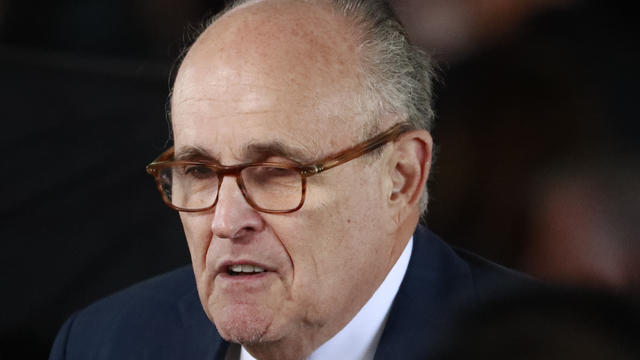 Rudy Giuliani, one of President Trump's attorneys, said Sunday that his client doesn't have to comply with a subpoena from the special counsel's office and instead "can assert the same privileges other presidents have." This comes as the Washington Post reported this week that Special Counsel Robert Mueller has told the president's lawyers that Mr. Trump might be subpoenaed if he doesn't agree to answer investigators' questions.

Asked on ABC's "This Week with George Stephanopoulos" if he would recommend that the president sit down for an interview with investigators, Giuliani said, "Not after the way they've acted. I came into this case with the desire to do that, and they just keep convincing me not to do that."

"They're trying to trap -- you couldn't put a lawyer on the show who wants to keep his law license to tell you he should testify," he said.

He added, "I wouldn't be an attorney if I did that, I'd live in some kind of unreal fantasy world that everyone tells the truth."

Giuliani also said that he can't be confident the president won't invoke his Fifth Amendment rights if he speaks with the special counsel.

"I've got a client who wants to testify please, he said it yesterday, and Jay Sekulow and I said yesterday, 'I hope we get a chance to tell him the risk that he's taking,' so he may testify, we may actually work things out with Bob Mueller because working it out directly is good," said Giuliani.

On Friday, Mr. Trump told reporters he'd "love to" speak with Mueller about the Russia investigation but will only do so if he can be "treated fairly."

As for whether the president's personal attorney, Michael Cohen, would cooperate with Mueller's team, Giuliani said he expects him to cooperate but that he "doesn't have any incriminating evidence about the president or himself." The former New York City mayor told ABC that a pardon for Cohen was also "obviously not on the table."

Meanwhile, when asked if Cohen made any payments to other women on behalf of the president besides adult film star Stormy Daniels, Giuliani said, "I have no knowledge of that, but I would think if it was necessary, yes."