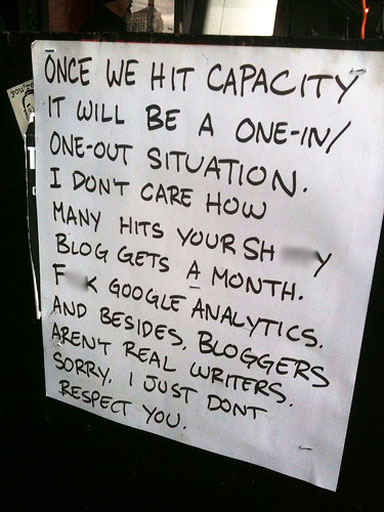 Another South By Southwest has come and gone, a conference where the concept of working and playing hard is definitely put to the test (bringing tens of thousands of people and over $100 million to the city of Austin, Texas each spring.) With the technology and Internet sectors growing like wild fire, Interactive seemed to be the place everyone wanted to be, setting record attendance for a festival that began with only music in 1987.

The fact is, not only is SXSW evolving but so is tech. No longer is it just about technology as a lone soldier. Technology is becoming culture and an extension of all our lives. The gap is getting blurred and to many who've been around and care about the community, that leaves a bad taste in their mouths. But since I prefer to see the glass as half full, I simply see more opportunity to create and connect than ever before, and that excites me!

In 2007, a then-unknown company at the time called Twitter launched at SXSWi. And while it's rare for a site to follow in its footsteps, here are some trends I saw make an appearance that might have an impact on our lives in the next year:

Spotify: Pegged to Save The Music Industry

This peer-to-peer music service has about 7 million users already in Europe. With a library of over 10 million songs, the streaming service allows you to get as close as possible to the concept of owning music (like on an ITunes player) without actually paying anything. A subscription model is available for those who wish to access their music when offline. Founder and CEO (who also happens to be 26-years old!) made the closing keynote expressing Spotify's goals to "make music like water."

Gowalla and Foursquare: It's all about Location

As much as we're all connected online, new location based services like Gowalla and Foursquare, where you check into locations and share those spots with friends, saw their popularity climb in the last year. You can now see spots that are popular or "trending," so that you know where to see and be seen in your city of choice.

Sounds like a concept from Star Trek but Augmented reality is becoming more and more a real part of our reality. Tech god Robert Scoble sported an AR shirt during SXSW, whose bar code allowed you to connect with a game called scavengar.com when seen through an IPhone App. He spoke to me about the practical future of this technology at The SXSW Tweethouse:

This isn't new. As this space is becoming more mainstream, the players (some geeks in their own right) are now the cool kids that everyone wants to hang with. This was more apparent than ever as Leo Laporte, known for his popular tech show. TWIT, recorded the longest live-streamed crowd surf. Rock on:=http:>=http:>

No matter how connected or disconnected we all are, there's one thing that does connect us all of us and that's the pursuit of happiness. Zappos CEO, Tony Hsieh used the conference to bring people together on his own happiness party bus in promotion of his upcoming book, "Delivering Happiness". While hopping from one party to the next, he emphasized the goals of his tweets and book: "ICEE=Inspire, Connect, Educate, Entertain."=http:>=http:>

So while Twitter was not necessarily the Belle at this year's ball, (with Evan Williams' keynote having audiences members jolting within minutes to the exit sign), it still has established a foundation guiding all of these new trends. It's a foundation that I hope we don't see destroyed. As I heard co-founder Biz Stone recently say, Twitter is not just about technology, it's about humanity. You can RT me on that one!