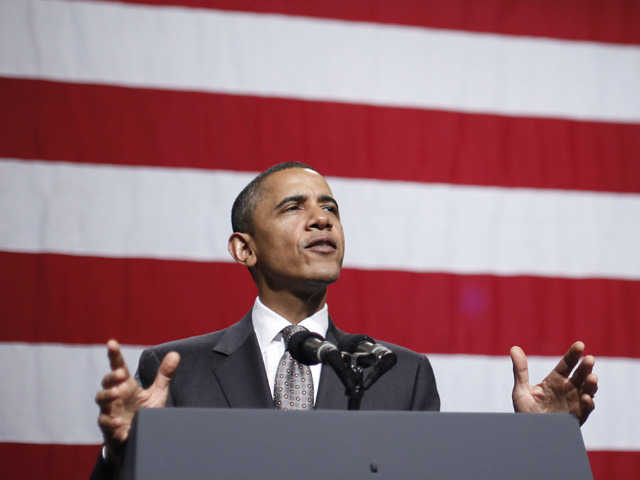 With just days to go until the 2010 midterm elections, the public is divided in their assessment of President Barack Obama's job performance: 45% approve of the job he is doing, while more - 47% - disapprove, according to the latest CBS News/New York Times Poll.

Barack Obama's approval rating, which has been below 50% since the spring, is similar to that of three recent Presidents - Bill Clinton (43%), Ronald Reagan (46%), and Jimmy Carter (48%) - as they each headed into the homestretch of their first midterm elections. As is often the case, each of these Presidents' respective parties lost seats in Congress. However, two of them went on to be successfully elected to second terms.

In 1994, the Democrats held majorities in both houses of Congress, just like the party does today. The early years of the Clinton presidency were marked by a failed attempt to reform health care, the beginning of the Whitewater investigation, and even though the economy wasn't in as bad shape as it is now, it was still on the mend. President Clinton's approval rating was below 50% percent for much of his first two years in office. In what is often dubbed "The Republican Revolution," the Republicans gained more than 50 seats in the House of Representatives, and also captured control of the U.S. Senate. It was the first time the Republican Party had control of the House in 40 years.

In the case of Republican President Ronald Reagan, he received mostly positive approval ratings during his first year in office, but by 1982 the economy was in serious trouble. President Reagan was trying to cope with a national unemployment rate of 10.4%, even higher than today's 9.6%. The Democrats already held control of the House of Representatives heading into the 1982 midterms, and the Republicans lost 26 seats that year, increasing the Democratic Party's majority.

Despite these significant losses in Congress, both Clinton and Reagan were reelected to second terms. In 1984, the unemployment rate was still fairly high (above 7% in October of that year) but it was on the decline. During the campaign, Reagan repeated a question he used against opponent Jimmy Carter in 1980: "Are you better off than you were four years ago?" - and, this time, most Americans felt they were. He coasted to reelection. For Mr. Clinton, the economy also rebounded and he was awarded a second term in 1996.

For Democratic President Carter, his party lost 15 seats in the House of Representatives in the midterm elections of 1978 but remained in the majority. However, Mr. Carter's first term was plagued by increasing inflation and an oil crisis; he was defeated in his bid for a second term in 1980 by Ronald Reagan.

Barack Obama's immediate predecessor, Republican President George W. Bush, experienced the rare instance of his party actually gaining seats in his first midterm election in 2002. His approval rating at the time was 62%; a rating that had soared in the aftermath of the terror attacks of September 11th, 2001. Prior to 2002, the last president to have his party pick up seats in his first midterm election was President Franklin Roosevelt in 1934 when the country, mired in the Great Depression, embraced President Roosevelt's New Deal programs. Even though Mr. Bush's ratings declined some after reaching historic heights, he won reelection to a second term in 2004.

It was a different story for President George H.W. Bush. Just prior to the 1990 midterm elections, he enjoyed a 52% approval rating from the American public. The Republicans lost only a handful of House seats in that election and the Persian Gulf War that followed in 1991 rallied the country around Bush 41. In March 1991, his approval rating reached a high of 88%, but his popularity was short-lived. As the victory glow of the Persian Gulf dimmed and the economy began to deteriorate, Mr. Bush's approval rating plunged to 31% in July 1992 - the lowest rating of his presidency. That November, he was defeated by Bill Clinton in his bid for a second term.

History shows that losses by a President's party in their first midterm elections do not necessarily spell gloom and doom for that President. A more accurate barometer may be the nation's economic picture. It has been critical to the success and failure of many Presidents.

Jennifer De Pinto is manager of election and survey information for CBS News. Click here for more of her posts in Hotsheet.