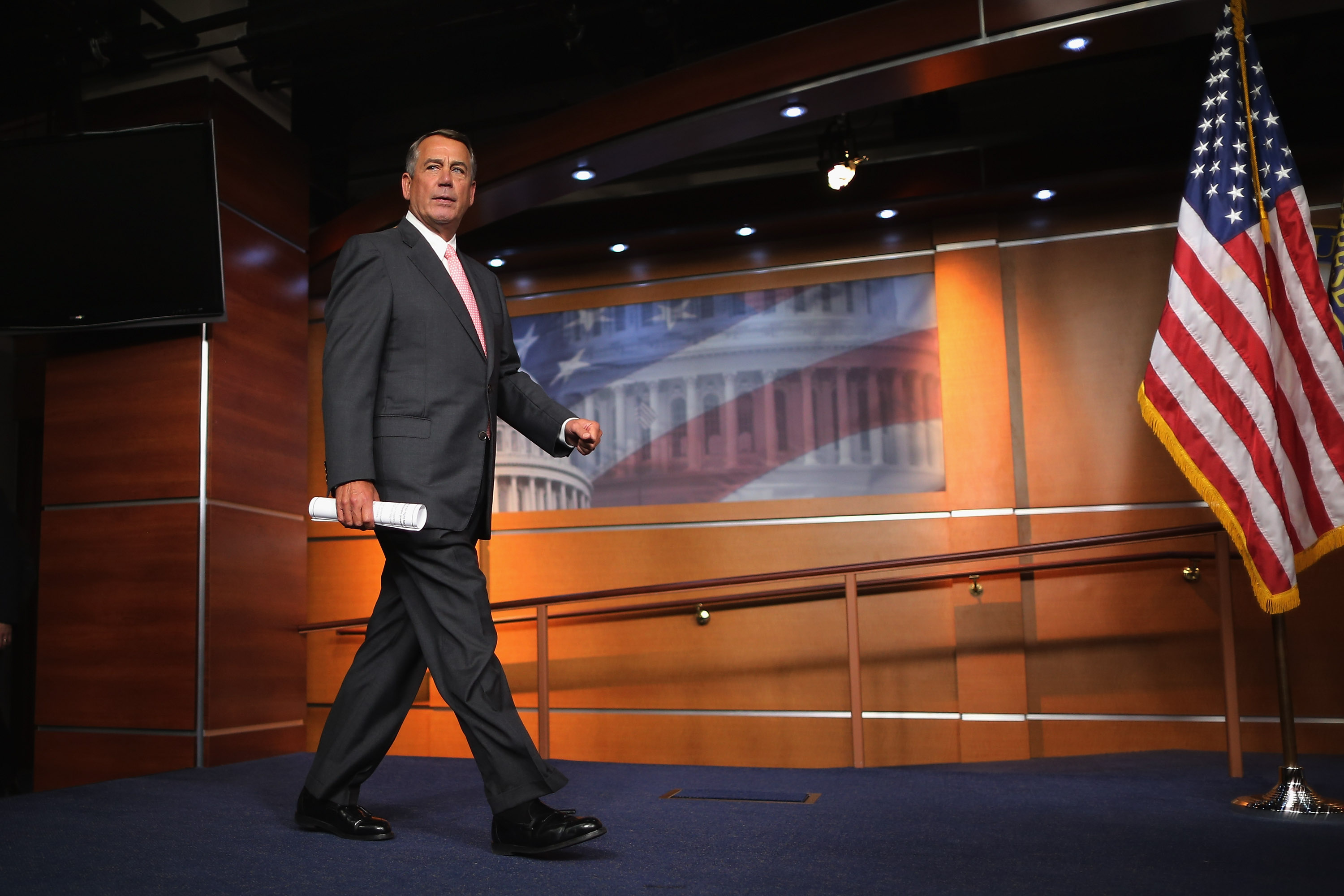 If House Speaker John Boehner, R-Ohio, has his way, Congress will fund the government, instead of shutting it down when the last spending bill expires Wednesday night.

When "Face the Nation" moderator John Dickerson asked Boehner whether there would be a shutdown, his answer was an unequivocal, "no."

"The Senate is expected to pass a continuing resolution next week. The House will take up the Senate bill," Boehner said. (That was his way of saying that the government would remain open.) "We will also take up a select committee to investigate these horrific videos that we have seen from abortion clinics in several states that really raise questions about the use of federal funds and raise questions about aborted fetuses that are born alive."

Tom Davis, a former Republican congressman from Virginia, did not think Boehner was being unrealistic.

"We won't have a government shutdown next week," he told CBS News. "He's put his speakership on the line to make sure that happens."

Last week, Senate Democrats blocked a bill that would have stripped Planned Parenthood of taxpayer funding, while it also would have allocated money for the rest of the government. When that failed, Senate Majority Leader Mitch McConnell, R-Kentucky put a so-called "clean" continuing resolution on the calendar that would keep the entire government running (and would also continue funding Planned Parenthood at current levels). The Senate begins voting on that bill Monday, and it's expected to pass.

To avoid a shutdown, the House will also need to pass the bill. Rep. Mick Mulvaney, R-South Carolina, one of the most conservative members of the GOP, predicted that's exactly what will happen.

"My guess is we will cut a deal with Democrats, or at least some Republicans will in order to keep the government open next week," he said on "Fox News Sunday."

At the Values Voters Summit last week, Sen. Ted Cruz, R-Texas - who helped spark the last government shutdown in 2013 - warned that Boehner had cut a deal with House Democratic Leader Nancy Pelosi, D-California to fund the government through the rest of President Obama's term, including the Affordable Care Act, Planned Parenthood, and the nuclear deal with Iran .

Not true, Pelosi said on CNN's "State of the Union" Sunday.

"All we have agreed is that we have to honor the calendar, which says that on September 30th, the fiscal year ends and we have to have a continued resolution to take us forward as we prepare for our omnibus bill which will take us through the next year," she said.

Boehner himself said Sunday that he was "sure" the spending bill would require Democratic votes.

The stopgap bill that the Senate is considering would only fund the government through Dec. 11.

While the rest of the country will be planning its holiday season, Congress will likely be returning to issue of funding the government. Republican leaders have already talked about using an obscure budget tool called reconciliation to end funding for Planned Parenthood when they write a longer government funding bill.

Davis put the odds of a shutdown at less than 50 percent. But he acknowledged the fight along the way could get bloody, especially as the presidential campaign goes into full swing.

"Presidential candidates they are scurrying to their corners to try to win primary voters which tend to be very liberal and very conservative. It gets much more complicated. I still think chances for shutdown [are] less than 50/50, but there will be some dead bodies along the way," he said.

Boehner seemed to send a warning shot to some of those presidential candidates and members of his own party Sunday when he warned about "false prophets" who promise things they cannot possibly achieve.

But there are forces both from inside the Republican conference and from the outside that will exert pressure on the next speaker, too, though, Davis said.

"These outside forces are still focusing on and still polarizing forces within the conference with a Republican grassroots that doesn't want any compromise with Washington. They want somebody to pick up the brick and throw it through the plate glass window."

This polarizing impulse has a lot to do with the primary process. Davis explained that an overwhelming percentage of lawmakers who live in the House live in partisan districts, where they only have to worry about winning a primary election. And the voters who show up for those primary elections don't like compromise - they like the brick-throwers.

What else will Boehner do before he leaves?

Boehner has 30 more days running the Republican party in the House, and he promised to keep make decisions "the same way I have over the last four-and-a-half years." But he also predicted that he might "have a little more cooperation from some around town to try to get as much finished as possible."

In other words, he said, "I don't want to leave my successor a dirty barn. I want to clean the barn up a little bit before the next person gets there."

What that probably means is that Boehner will try to raise the debt ceiling, pass a highway bill, extend the Export-Import bank, maybe even hammer out a longer-term spending bill.

But "there will be a lot of controversy in the Republican conference, and he is going to have to do it with Democratic votes. Having said that, the House can move very quickly when it wants to on a majority and this will give him an opportunity to leave a legacy should he do this," Davis said. "If you can clear this out now and get these issues behind us before you get into the presidential election..., it's a good thing."

Rep. Tom Cole, R-Oklahoma, one of Boehner's allies in the House, said on "Fox News Sunday" that compromise is the only way to get anything done.

"Anything you want to get done in this period, as long as the president is a Democrat, as long as the Democrats have a filibuster control, everything is going to have to be some sort of compromise. Or you can do nothing. We can just simply wait and hope we win the next election," he said.