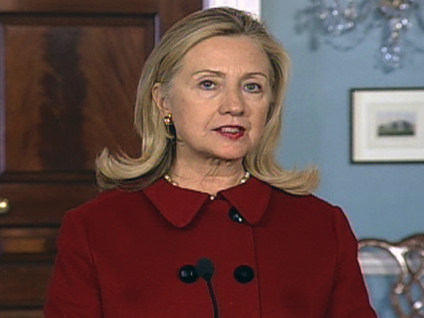 The Obama administration called for a peaceful and stable leadership transition in North Korea on Monday but made few demands on a nuclear-armed nation known for its unpredictability, poverty and hostility to the United States.

Prospects for new nuclear disarmament talks involving North Korea and the United States appeared to dim with the unexpectedly sudden death of North Korean leader Kim Jong Il and uncertainty surrounding the planned succession to his politically untested son. Top Obama administration national security officials are focusing intelligence and other assets on the opaque internal politics of the reclusive communist nation that former President George W. Bush once placed on an "axis of evil" enemies list.

"We both share a common interest in a peaceful and stable transition in North Korea as well as ensuring regional peace and stability," Secretary of State Hillary Rodham Clinton told reporters at the State Department after a meeting with Japanese Foreign Minister Koichiro Gemba.

"We reiterate our hope for improved relations with the people of North Korea and remain deeply concerned about their well-being," she said.

The United States is still looking for better relations with the North Korean people despite the "evolving situation," Clinton said.

She did not say how Kim's death would affect the U.S. approach to his country.

Nor did she make any demands on the new leadership, passing up the opportunity to reiterate longstanding U.S. calls for North Korea to follow through on previous nuclear disarmament pledges. The omission of what has been a standard element of any U.S. officials' comments on North Korea appeared to underscore Washington's concern about the situation.

The State Department later said it still was the U.S. view that North Korea make good on those commitments. But the department said Kim's passing and assumption of power of his son, Kim Jong Un, would delay anticipated developments on resuming nuclear disarmament talks with the North and supplying the nation with food aid.

The United States had been quietly pursuing a new diplomatic opening with North Korea, including hopes for new nuclear talks as soon as next week. That opening now appears on hold, while U.S. officials warily assess whether Kim Jong Un can seize his father's mantle.

As sources tell CBS News political correspondent Norah O'Donnell, there are real concerns about the volatility of Kim Jong Un.

U.S. officials say Kim Jong Un is young, untested, and inexperienced and has quote "shown proclivities toward violence," reports O'Donnell. U.S. intelligence believes he encouraged the attacks on the South last year - including the sinking of that South Korean naval ship killing 46 and the shelling of islands in the South. Belligerent moves that U.S. officials suspect was meant to bolster Un's credibility with North Korean military leaders.

The administration had been expected to decide, possibly as early as Monday, whether to try to re-engage the reclusive country in nuclear negotiations and provide it with food aid. State Department spokeswoman Victoria Nuland said that decision had been postponed as the administration was now focused on consulting with concerned nations on events in Pyongyang.

Officials have said the U.S. was concerned about any changes Kim's death might spark in the military postures of North and South Korea, but were hopeful that calm would prevail, despite the test of a short-range missile by the North just hours after the announcement of Kim's death.

The White House said Monday it was too early to make any judgments about whether Kim Jong Il's death would provide an opening for better U.S. relations with North Korea. And spokesman Jay Carney said the longtime leader's death had not spurred any new concerns about North Korea's pursuit of nuclear weapons.

"We will continue to press them to meet their international obligations. But we have no new concerns as a result of this event," he said.

Carney declined to make any assessment of the younger Kim. "We will judge the North Korean government as we always have: by its actions," he said.

The administration had been poised to announce a significant donation of food aid to North Korea this week, the first concrete accomplishment after months of behind-the-scenes diplomatic contacts between the two wartime enemies, according to those close to the negotiations. And an agreement by North Korea to suspend its controversial uranium enrichment program was expected to follow within days, the officials said.

Nuland said the U.S. wanted to be respectful of North Korea's period of mourning, and would need to re-engage "at the right moment."

The food aid announcement would have not only been welcome news for North Korea, but also pave the way for a crucial U.S.-North Korea meeting in Beijing on Thursday. That meeting in turn could lead to the resumption of nuclear disarmament talks that also would include China, Japan, Russia and South Korea.

The so-called six-party talks were last held three years ago, and resuming them would amount to a foreign policy coup for the Obama administration.

Two senior U.S. diplomats were in North Korea's lone ally, China, last week to discuss the issues. They met Obama's top national security aides on Monday to discuss the way forward. But decisions will be delayed as it is not clear whether North Korean officials will be in position to handle any engagement with the outside, the U.S. officials said.

Carney said the administration has been in touch with officials in South Korea, Japan, China and Russia following the news of Kim's death.

The top U.S. military officer, Gen. Martin Dempsey, told reporters in Germany the United States and its allies had not seen any change "in North Korean behavior of a nature that would alarm us," according to the American Forces Press Service. The Joint Chiefs of Staff chairman said there had been no changes to the alert readiness for U.S. forces on the peninsula, although South Korea has put its military and police on alert.

Kim's death was announced by state media in a "special broadcast" from Pyongyang late Sunday. North Korea will hold a national mourning period until Dec. 29. Kim's funeral will be held on Dec. 28, it said.