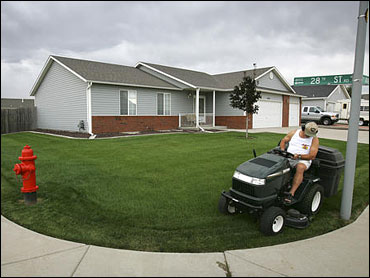 More than 100 years ago, New York Tribune editor Horace Greeley told his fellow Americans to "Go west." And they still are.

Greeley, whose first settlers included an editor who had worked for the famous 19th century journalist, ranked just ahead of two other Western communities: St. George, Utah, and Las Vegas.

Greeley City Manager Roy Otto said the area has grown because it's a reasonable commute to Denver and has relatively inexpensive homes.

The annual Census estimates of urban population growth show the New York-northern New Jersey-Long Island area with a population of 18.6 million. The number of people in the region, the nation's largest metropolitan area, was up 1.7 percent from three years earlier.

The Census Bureau defines a metropolitan area as a region containing at least one urbanized area of 50,000 or more people. The report released Thursday focused on growth estimates from 2000 to 2003, the most recent information available.

Americans have been moving south and west for decades, with a big jump in population in the South, starting in the 1970s. Still, the West continues to outpace all other regions.

The population of the western United States grew by 19.7 percent in the 1990s, followed by the South, with 17.3 percent more people. The Midwest and the Northeast posted single-digit increases in population.