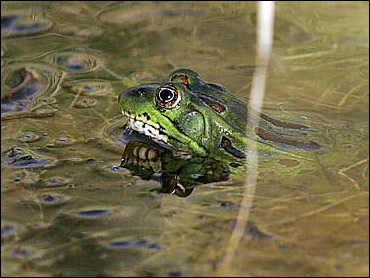 Green and black spotted frogs loiter beneath the surface of a concrete pond's glassy water, their bumpy heads occasionally breaking through into the desert air.

Others hop into the pool from behind tall tufts of dry grass, diving below their glistening eggs nestled in tangled, floating plants.

A rancher transported the threatened Chiricahua leopard frogs to the artificial pond here because they were dying in a nearby reservoir that was being reduced to dried, cracked mud by years of drought. At the frogs' new home, a rush of water replenishes the pond when the water level drops.

"I knew something needed to be done," said rancher Matt Magoffin.

Providing artificial safe havens for the frogs is one of many efforts being carried out to help threatened and endangered species that have been further imperiled by the drought throughout the West.

Elsewhere in Arizona, biologists are plucking leopard frogs and eggs out of drying pools and taking them to museums and zoos to protect the adults and allow tadpoles to develop. To make sure endangered Sonoran pronghorns get enough nourishment, officials are watering the desert to replenish shriveled plants.

With only about 60 Sonoran pronghorns left in the United States, unconventional measures have become a necessity, wildlife officials say.

"We dug wells and we are pumping water into the desert to enhance the nutritional value of the plants they eat," said Paul Krausman, a University of Arizona wildlife conservation and management professor. "Those are drastic measures."

And farmers in the Northwest have sold water to increase flows for threatened and endangered fish. Environmental groups, developers and government agencies are working to protect a federally listed ground beetle, tiger salamander and several shrimp that live in seasonal pools.

Most of the efforts are intended to help the animals survive the drought. But officials also are investigating long-term solutions, saying population spikes and global warming could lead to future dry spells.

Wildlife officials are working on a recovery plan for the leopard frogs in the hopes of getting the animals off the Endangered Species List, where they have been protected since 2002.

Since the frogs have disappeared from more than 75 percent of their natural range in Arizona and New Mexico, it isn't expected to be a swift process, said U.S. Fish and Wildlife biologist Jim Rorabaugh.

"I wouldn't say that we are looking at extinction, but the species is in dire straits in certain geographic areas," Rorabaugh said.

Many animals are endangered or threatened because of logging, urban sprawl, the invasion of nonnative species and other factors that have harmed wildlife habitat and reduced river flow. The drought has just made their fights for survival more difficult.

"It is important to help them through a drought because of all of the other additional problems we have laid on them," said Melanie Lenart, research associate with Climate Assessment for the Southwest, a University of Arizona project.

The drought has been crippling the West for years, although a rainy winter brought some relief across the Southwest. Arizona and New Mexico had one of their wettest winters in more than a century, Lenart said.

"The question is, is this just a blip of nice precipitation in the middle of drought, which does happen, or are we really coming out of the drought?" Lenart said. "That really remains up in the air."

Wildlife experts note that plants and animals have more difficulty adapting to drought in the forests and mountains. But in the desert, where drought conditions exist 43 percent of the time, species like the Chiricahua leopard frogs should be better able to adapt, said U.S. Fish and Wildlife spokesman Jeff Humphrey.

"When you see frogs declining," he said, "it throws a red flag and shows something is going wrong."