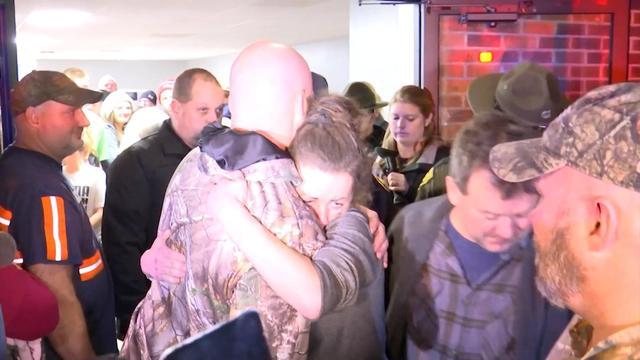 After 111 hours stranded underground, three people who went missing in a West Virginia coalmine are now recovering in a hospital after rescuers located them on Wednesday. A fourth person who emerged from the mine on Monday helped find the other three.

According to police, the group went into the mine to steal copper wiring and could face criminal charges. One of the searchers told CBS News' Chip Reid the rescue mission could cost as much as $1 million.

Emergency workers raced around the clock for four days to find Cody Beverly, Erica Treadway, and Kayla Williams, searching deep into the Whitesville, West Virginia, mine while the percentages on their oxygen detection gauges neared deadly levels.

Entering the mine – which had been inactive for two years – was not easy. Rescuers had to remove water at one entrance and bulldozed a new road outside the other. They used fans to help pump in air. Four thousand feet underground in the mine, rescuers said they reached Treadway first at 6 p.m. then Williams and Beverly 30 minutes later. All three walked out on their own.

Friends and family were jubilant during the reunion Wednesday night

"This right here community loves one another. You might see us next week having a difference or whatever cause we're human. But when it gets down to push comes to shove, we love one another," said Greg Scarboro, Cody Beverly's grandfather.

"Our rescuers, there's nothing like them…In fact, right when they were gathering together, all of them came by me and hit me on the shoulder and said we're gonna get them. We're gonna find them. And they did."

Eddie Williams is Kayla's cousin and was originally with the group but emerged from the mine first on Monday. One question that officials have yet to answer is how Williams became separated from the other three and how he managed to escape alone.