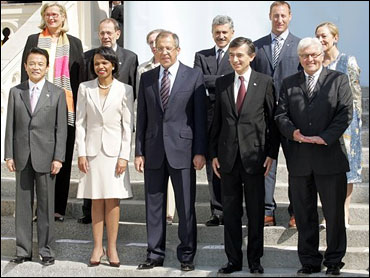 The United States, Russia and other industrial democracies said Thursday they expect Iran to answer "yes" or "no" next week to an international offer to bargain over Tehran's disputed nuclear program.

The international coalition that made the offer to Iran this month "will assess the situation before mid-July," the statement said. Leaders of the Group of Eight industrial nations will meet in Russia July 15-17, and are expected to consider the Iran situation.

The United States has not issued its own separate response, but Secretary of State Condoleezza Rice signed on to the joint statement, which is a coded criticism of Israel.

At a news conference following lengthy meetings with the diplomats from Russia, Germany, the United Kingdom, the United States, Italy, France, Canada and Japan, Rice noted the call for restraint from Israel.

"With restraint, perhaps, we can get back to a place where there are hopes again for a peace process," Rice said.

On Iran, the G-8 diplomats called Tehran's nuclear program "a source of international concern," and endorsed the offer to Iran to accept economic incentives in return for swearing off disputed aspects of the program, which Tehran claims is peaceful.

"An agreement of this sort would allow the Iranian people to enjoy the benefits of modern civil nuclear power and would bring Iran many other long-term political and economic advantages," the G-8 ministers' statement said.

"We are disappointed in the absence of an official Iranian response to this positive proposal," the statement said.

On Iraq, they offered support to the new permanent Iraqi government and commended its new national reconciliation initiative, which some U.S. politicians have criticized as too accommodating toward insurgents.