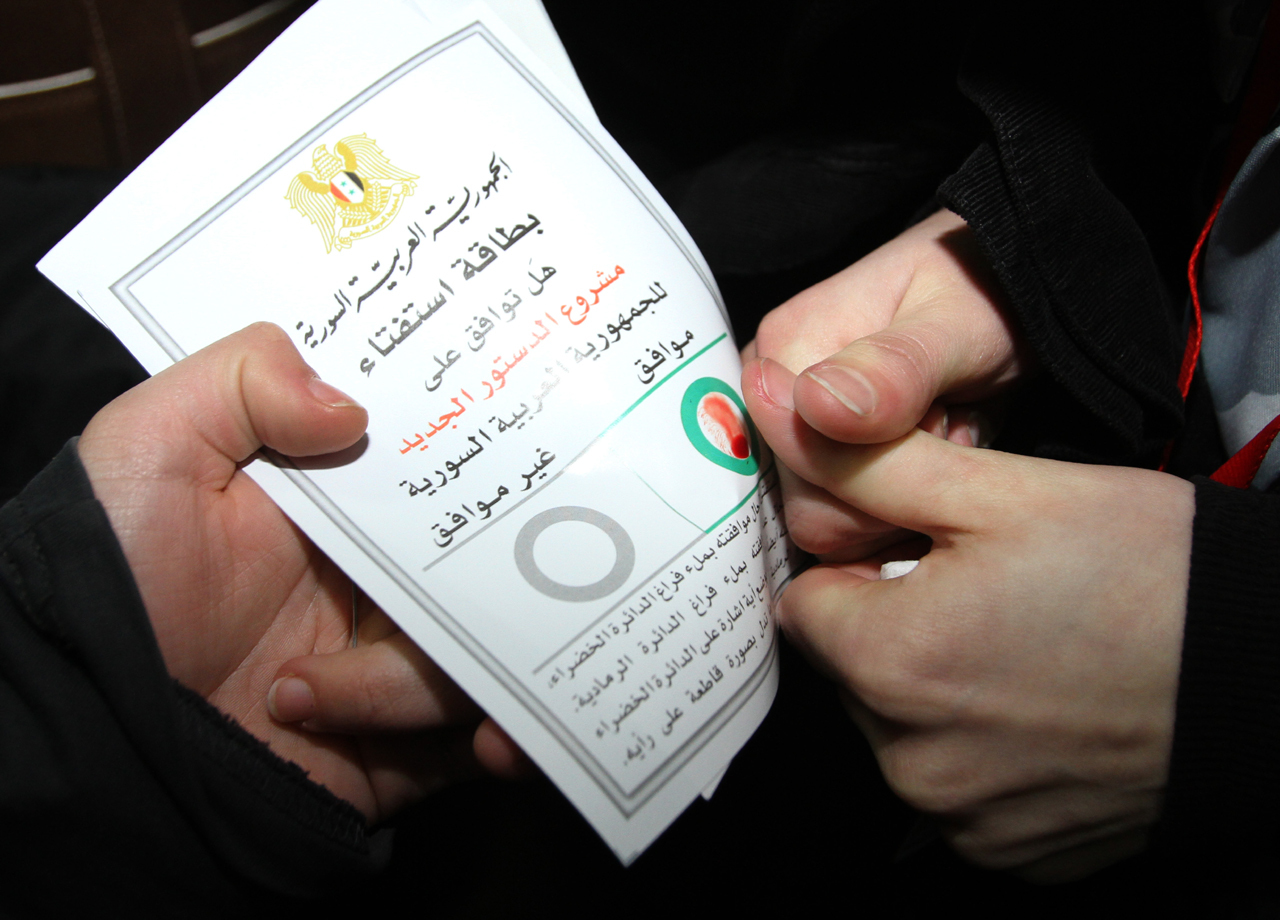 DAMASCUS, Syria - Syria's authoritarian regime held a referendum on a new constitution Sunday, a gesture by embattled President Bashar Assad to placate those seeking his ouster. But the opposition deemed it an empty gesture and the West immediately dismissed the vote as a "sham."

Even as some cast ballots for what the government has tried to portray as reform, the military kept up shelling of the opposition stronghold of Homs, which has been under attack for more than three weeks after rebels took control of some neighborhoods there. Activists and residents report that hundreds have been killed in Homs in the past few weeks, including two Western journalists.

The Red Cross spokesman said the humanitarian group had been unable to enter the besieged Homs neighborhood of Baba Amr since Friday, describing the humanitarian needs there as "very urgent."

Activist groups said at least 29 people were killed on Sunday, mostly in Homs. At least 89 were reported killed on Saturday alone, one day before the referendum. Activists estimate close to 7,500 people have been killed in the 11 months since the Assad regime's brutal crackdown on dissent began.

"It's a phony referendum, and it is going to be used by Assad to justify what he's doing to other Syrian citizens," she said in an interview with CBS News in Rabat, Morocco.

Speaking to reporters in Rabat, Clinton called on Syrians in business and the military who still support Assad to turn against him.

"The longer you support the regime's campaign of violence against your brothers and sisters, the more it will stain your honor," she said. "If you refuse, however, to prop up the regime or take part in attacks ... your countrymen and women will hail you as heroes."

Other countries also lambasted the vote.

"The referendum in Syria is nothing more than a farce," German Foreign Minister Guido Westerwelle said. "Sham votes cannot be a contribution to a resolution of the crisis. Assad must finally end the violence and clear the way for a political transition."

U.S., European and Arab officials met Friday at a major international conference on the Syrian crisis in Tunisia, trying to forge a unified strategy to push Assad from power. They began planning a civilian peacekeeping mission to deploy after the regime falls.

"It is time for that regime to move on," President Barack Obama said Friday of Assad's rule.

For his part, Assad said Sunday that Syria is subject to a "media attack." He often blames the uprising on Islamist extremists and "armed gangs."

The Britain-based Syrian Observatory for Human Rights reported intense clashes between troops and army defectors in the villages of Dael and Hirak in the province of Daraa, where the uprising started. The group also said explosions were heard in the village of Khirbet Ghazaleh and Naima as well as the provincial capital, Daraa.

The Observatory and other activist groups reported violence in several areas including Idlib, Homs and the eastern province of Deir el-Zour.

"I am boycotting the vote," Syria-based activist Mustafa Osso told The Associated Press by phone. He added that previous "reforms" have made little difference. Assad's government revoked the country's official state of emergency in April, but the crackdown on dissent has only intensified.

The referendum on the new constitution allows at least in theory for opening the country's political system. It would create a multiparty system in Syria, which has been ruled by the Baath party since it took power in a coup in 1963. Assad's father, Hafez, took power in another coup in 1970.

It also imposes a limit of two seven-year terms on the president, though Syrian legal expert Omran Zoubi said Assad's time in office so far wouldn't count. That means he could serve two more terms after his current one ends 2014, keeping him in office until 2028.

Such changes would be unthinkable a year ago, but since Assad's security forces have killed thousands in their effort to end the uprising, most opposition groups say they'll accept nothing short of his ouster.

In the capital Damascus, a regime stronghold where many in the business class and religious minorities support Assad, the Information Ministry took foreign reporters to visit polling stations. Many said they were eager to vote, though the proximity of government minders who accompanied journalists could have prevented them from speaking freely.

"This is a good constitution. It calls for party pluralism and the president can only hold the post for two terms. These did not exist in the past," said civil servant Mohammed Diab, 40, who waited with four others to vote in the posh Abu Rummaneh neighborhood.

Jaafar Naami, 28, who works for a private insurance company, said: "I am here to say yes for the new constitution. This is not the time to say no. People should unite."

Fewer voters turned out in the areas of Rukneddine and Barzeh, where anti-government protesters have recently demonstrated.

In Barzeh, about 20 percent of shops were closed, apparently in compliance with the calls for a strike. Turnout was very low at a polling station in the area, with individuals trickling in to vote every few minutes.

One man said he had come to vote at a center away from the district's center, where he said there was "pressure not to vote ... intimidation and calls for public disobedience." He did not give his name for fear of reprisal.

In Rukneddine, turnout in the morning was low, but picked up in the afternoon. Still, people cast ballots as they arrived with no need to stand in line.

A Syrian-American voter who only gave her first name, Diana, said after voting yes: "My friends attacked me for voting. They said, 'Don't you see people are dying?' But for me, voting is my right. The president is on the right track. When someone hits you, you have to hit back." She added: "Syria is under attack."

Another woman refused to talk to the AP because it is an American agency. She attacked Obama over his call Friday for Assad's regime to "move on."

"Tell Obama I hope he dies, like he is killing Syrian people," she said.

One woman emerged from the station and said she voted "no" without elaborating, and walked away quickly.

Posters around the capital Damascus urged people to cast ballots. "Don't turn your back on voting," one said.

Turnout is expected to be minimal in opposition strongholds such as Homs, the northwestern province Idlib and the southern region of Daraa where armed rebels frequently clash with security forces.

A spokesman for the International Committee of the Red Cross, Hicham Hassan, said the group's local chapter had not been able to reach the embattled Homs neighborhood of Baba Amr since Friday, when it evacuated 27 people.

"Needs are very urgent," he said. "It is absolutely crucial that we are able to enter in order to evacuate people and to bring in vital assistance."

The repercussions of the Syrian conflict are rapidly spilling over borders. More than 80,000 Syrian refugees have sought refuge in neighboring Jordan, officials there have said.

Turkey and Lebanon also are harboring many Syrian refugees.