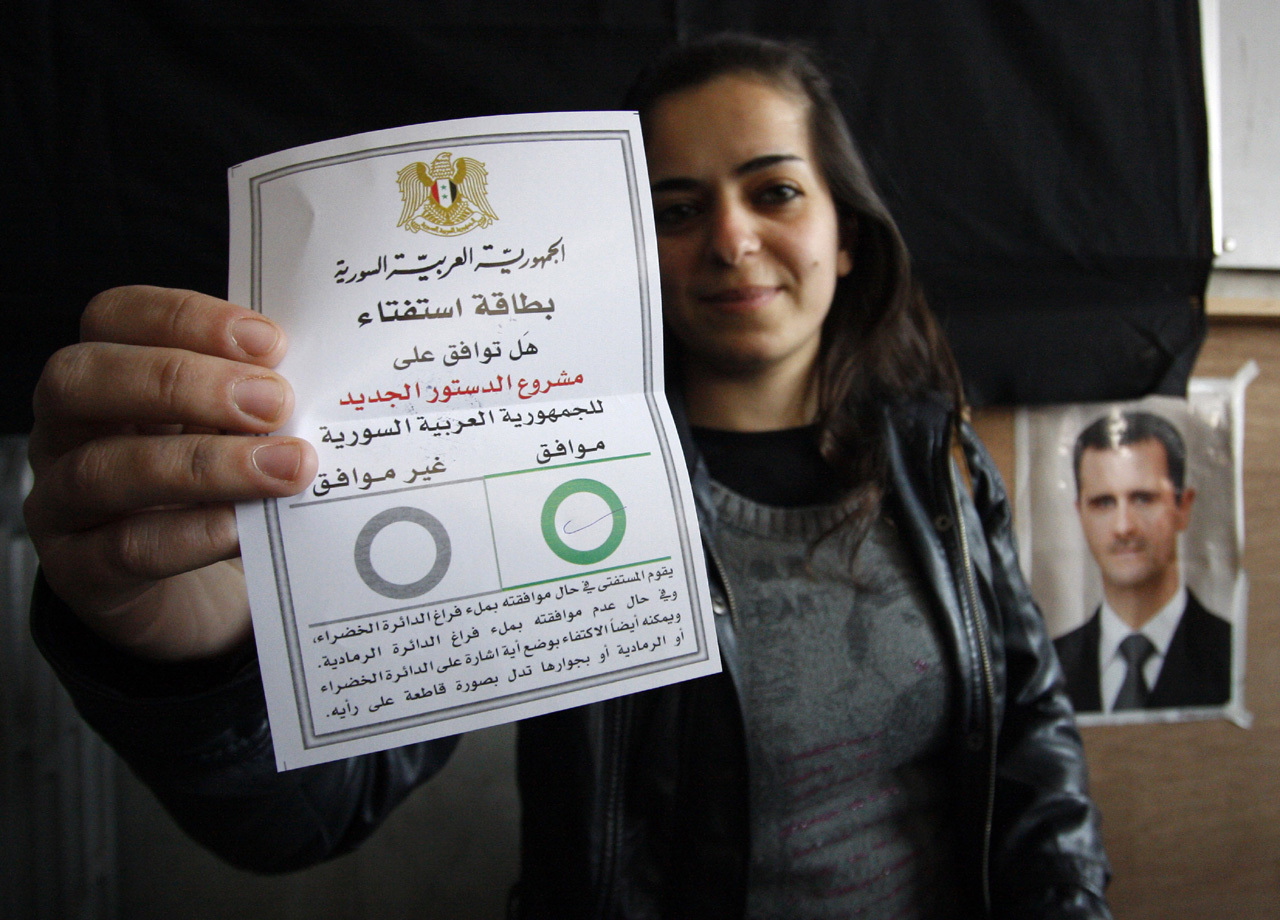 Syrians on Sunday went to the polls for a referendum on a new draft constitution that could effectively end the monopoly of the ruling party, amid calls for boycott by the opposition and continued violence in hot spots.

The Interior Ministry said 11,185 polling stations opened at 7 a.m. and would keep receiving people to 7 p.m., adding the process could be extended until 10 p.m. in case of a big turnout.

Almost 14,4 million eligible voters (those over 18) - including police, the Army and security forces - can cast their "yes" or "no" ballots in this plebiscite. Stations opened also at state establishments to enable employees to take part, along with polling centers at airports and border crossing points.

Assad himself, and his wife, cast their votes earlier in the day in the state-run TV center, nearby the Omayad square, where a large crowd turned out and shouted slogans in his support, calling him to continue the path of reform.

The first results of the referendum could be announced as early as Monday, according to Syrian sources.

The 157-article proposed charter would drop Article 8 of the Syrian Constitution, which declares the ruling Ba'ath Party as the "leader of the state and society."

Under the new constitution, authored by a 29-member Constitutional Committee, other parties would have the "right" to name their own candidates for the presidency, which would be set at a maximum of two consecutive seven-year terms.

Assad has been in power for 12 years, succeeding his father, who ruled for 30 years. The Ba'ath Party has ruled Syria since 1963. All of Syria's constitutions since 1920 had been written by an elected assembly - except for this one, and that of 1973.

The new draft also says the president should be over 40 and a Muslim, a prime flaw that independents in the Constitutional Committee were unable to correct.

Christians and secular Muslims raised red flags, but did not say they would boycott the referendum.

Thousands of people gathered in a main square in the capital to show their support to President Bashar Al-Assad, many carrying Syrian flags and pictures of the incumbent leader.

"I came here to say 'yes' to the reforms President Assad is leading," said Ammar, a 29-year-old engineer. "I think the draft constitution is unique, modern and an example that the countries of the Middle East should follow."

"Today is national celebration. Everyone should see what President Assad is doing. He is the only one among Arab leaders who cares of his people," said Samira, as her friends around her shouted slogans to show their loyalty to the President who is facing an unprecedented challenge to his rule.

On Saturday, the National Progressive Front, a 10-party coalition led by the ruling al-Baath Party, called on its members and followers to vote "yes" on the draft constitution. Other new parties formed recently followed suit, despite reservations about certain articles of the document, suggesting they would demand amendments in future.

The opposition outside Syria has called for an all-out boycott of the referendum, while the opposition inside the country said they reject the process for now.

Hassan Abdul Azim, General Coordinator of the National Coordinator Commission, which groups 11 national, socialist, leftist and Kurdish groups inside Syria, has said in a statement that his bloc would not take part in the referendum on the new draft constitution, saying the priority right now is "putting an end to violence rather than to a constitution drafted by the Syrian authorities." He called for the government to return Army forces to their barracks and free all detainees before arranging the referendum.

Amendments to Syria's constitution were a key demand by the opposition at the beginning of the country's uprising against the Syrian regime. But in the wake of the military's deadly assault on dissents, many opposition leaders are demanding nothing less than President Bashar Assad's departure.

The unrest started in March with mostly peaceful protests against the authoritarian regime. But the conflict has escalated in recent months into an open conflict between rebels troops and pro-Assad forces, with many observers warning the nation may be heading toward all-out civil war.

The United Nations estimated the death toll from the unrest at 5,400 in 2011 alone. The global body stopped updating that figure in 2012, however, as escalating violence and the government's ban on independent reporting made it difficult to obtain accurate information.