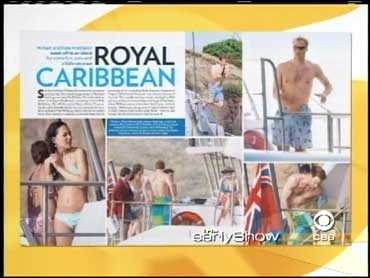 Is there a royal ritual lurking in Prince William's photos from Mustique, published in the current issue of People magazine?

Photos taken on the young prince's Caribbean vacation with his girlfriend, Kate Middletown, as they soaked up the sun have set off speculation back home about whether this is a prelude to their engagement.

But as CBS News correspondent Richard Roth reports on The Early Show, "don't count on it."

"I would say that it is extraordinarily unlikely that Prince William and Kate Middleton will get married," Vanity Fair correspondent Victoria Mather tells Roth. "I think what we are seeing is a very modern situation of a fine young man having an extremely nice girlfriend."

Prince William, the eldest son of Prince Charles and the late Princess Diana, has said he does not want to marry until he's older. The couple met at Scotland's St. Andrews University, and have dated steadily for several years. But they have been largely silent about their relationship. In fact, Kate is so silent about their relationship that the press has dubbed the young woman, "Her Royal Shyness."

Plus, Prince William is a busy man, Roth notes. He still has six months of training left at Sandhurst Military Academy and then he will be commissioned for a stint in the British army.

While brother Prince Harry has also been enjoying some vacation time with his girlfriend, on an adventure in South Africa, marriage may be more on the mind than in the cards for the two royal brothers.

"When Prince William's mother married she was 19 and look what happened there," Mather told Roth. "It's not a good omen, is it?"

Perhaps not, but as Britain is about to be reminded, exactly 25 years ago this summer when Prince Charles and Princess Diana wed, it looked awfully good at the time.

But Britain will still be treated to a royal wedding nonetheless in its future. Tomorrow, Prince William's step-sister, Camilla's daughter, is getting married.

The guests will have plenty to talk about.