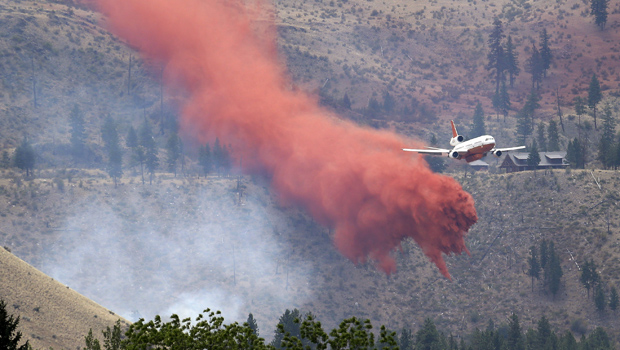 The military is activating C-130 air tankers to help fight massive wildfires across the Pacific Northwest this morning.

Nearly two dozen fires are burning almost one million acres in Washington and Oregon; 9,000 firefighters from across the country are now working on the frontlines, and more than 1,000 National Guard troops are on standby in Washington state.

The Carlton Complex Fire, ignited by lightning a week ago in north-central Washington, has burned more than 150 structures.

"Boy, it just come in through like a blowtorch," said homeowner Mike Johanns.

One death has been connected to the fire: 67-year-old Rob Koczewski died of a heart attack while trying to save his home.

The fire wiped out the power grid in four nearby towns, so even those whose homes survived may not have electricity for several weeks.

"Between Mother Nature and the lack of resources with everything going on in the region, it's very challenging," said one firefighter.

While Sunday's weather had slight improvements on the hot temperatures and gusty winds that have fueled the wildfires, the forecast for Monday and Tuesday calls for lighter winds and lower temperatures, said Spokane-based National Weather Service meteorologist Greg Koch.

"Overall, it looks like the weather scenario is improving," Koch said.

Then on Wednesday, a "vigorous" front is expected to cover Washington, bringing rain to much of the state. But it will also bring lightning, he added.

"The benefits of the system are still up in the air," Koch said. "We may get some rain where we need it, but we may also experience some lightning that could cause some new ignitions."

On Sunday, Okanogan County Sheriff Frank Rogers was driving to the town of Twisp to survey the damage.

"It's the first time in four days I've seen blue sky," he said. "Every day, when you got up, it was nothing but smoke. All we've seen of the sun is a red ball."

Although the weather was improving, the towns in the scenic Methow Valley remained without power and had limited landline and cellphone service. Okanogan County Public Utility District officials said fully restoring power to the area could take weeks.

Gov. Jay Inslee said Friday about 50 fires were burning in Washington, which has been wracked by hot, dry weather, gusting winds, and lightning. About 2,000 firefighters were working in the eastern part of the state, with about a dozen helicopters from the Department of Natural Resources and the National Guard, along with a Washington State Patrol spotter plane.

Karina Shagren, spokeswoman for the state's Military Department, said 100 National Guard troops were on standby, and up to 1,000 more in Yakima could receive additional fire training. Active-duty military could be called in as well, Inslee said.

The Washington state Department of Natural Resources announced Saturday evening that firefighters from New Mexico, Utah and Wyoming were coming to the state to help.

Early Saturday, authorities announced that they are bringing in two military air tankers from Wyoming to help fight wildfires in the Pacific Northwest and elsewhere. Officials at the National Interagency Fire Center in Boise, Idaho, said the tankers were activated to ensure that firefighters had adequate air tanker capability in the region.