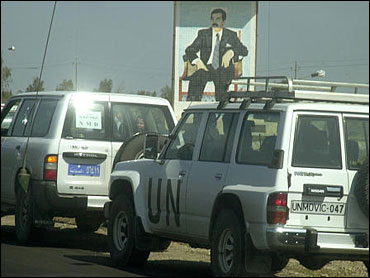 U.N. weapons inspectors climbed aboard a plane and pulled out of Iraq on Tuesday after President Bush issued a final ultimatum for Saddam Hussein to step down or face war.

A plane carrying the inspectors took off from Saddam International Airport at 10:25 a.m. It landed an hour and a half later in Laranca, Cyprus where the inspectors have a base.

U.N. spokesman Hiro Ueki said 56 inspectors as well as support staff were on board Tuesday. Reporters at the airport saw about 80 people boarding buses for the plane, and officials earlier estimated the total number of U.N. evacuees at about 150.

After failing to secure U.N. authorization to use force to disarm Iraq, President Bush gave Saddam 48 hours to step down or face war in a speech Monday night.

Iraq rejected the Bush ultimatum, saying that a U.S. attack to force Saddam from power would be "a grave mistake. Saddam warned that American forces will find an Iraqi fighter ready to die for his country "behind every rock, tree and wall."

But Saddam made a last-minute bid to avert war, admitting that Iraq had once possessed weapons of mass destruction to defend itself from Iran and Israel - but insisting that it no longer has them.

"We are not weapons collectors," the official Iraqi News Agency quoted him as saying. "When Saddam Hussein says he has no weapons of mass destruction, he means what he says."

Some of the inspectors were wearing their blue U.N. caps and waved to reporters as they left the terminal Tuesday.

"It's unfortunate we have to leave now," Ueki said at the airport. "I think all the inspectors and support staff have done our best."

U.N. weapons inspectors arrived in Baghdad for the first time in four years on Nov. 27, 2002 and resumed inspections two days later. During four months of inspections, arms experts traveled the length of the country hunting for banned weapons of mass destruction.

President Bush's speech Monday set the countdown clock for war. "The tyrant will soon be gone," said Mr. Bush, either by Saddam's own choice to leave, or by force. Saddam and his sons must leave Iraq within 48 hours, said Mr. Bush.

After the speech, the Iraqi ambassador to the United Nations dismissed the threat.

"The Iraqi side refused to accept what has been said by Bush, and this will be really the very bad solution for the whole region, for Iraq, for the United States ... and for humanity," said Ambassador Mohammed Al-Douri. "This will destabilize not only the region but other parts of the world. So I think this would be a mistake, a grave mistake from the part of the American administration to launch this war against my country."

Baghdad residents prepared for the worst, flooding markets to stock up on food, lining up for gas and bread and taping their windows for fear of flying glass from U.S. bombs. Storeowners moved their merchandise to the relative safety of warehouses, fearing bombs and looting if a war starts.

Other foreigners were already leaving ahead of the weapons inspectors. Pakistan, Germany and the Czech Republic announced they were closing their embassies in Baghdad. India and China evacuated their ambassadors while Greece said it expected to have its embassy staff out shortly. Diplomats from Bahrain staff left over the weekend.

Britain also advised all of its citizens except diplomatic staff to leave neighboring Kuwait as soon as possible, citing a potential threat from Iraq. Finland issued a similar advisory.

The United States had already ordered all government dependents and nonessential staff out of Kuwait, Syria, Israel, the West Bank and Gaza Strip; on Monday, it suggested that Americans in Lebanon should consider leaving.

In Kurdish-controlled northern Iraq, residents streamed out of the city of Chamchamal, a mile from Iraqi forces, heading deeper into the relative safety of Kurdish territory protected by U.S.-British air patrols. Cars, buses, tractors and pickup trucks were laden with rugs, suitcases and other belongings.

U.S. military officers in the Kuwaiti desert issued troops ammunition and showed them photographs of Iraqi soldiers so they could differentiate the different units and ranks. British Royal Marines gathered around portable radios to wait for any news on how soon they may go to war.