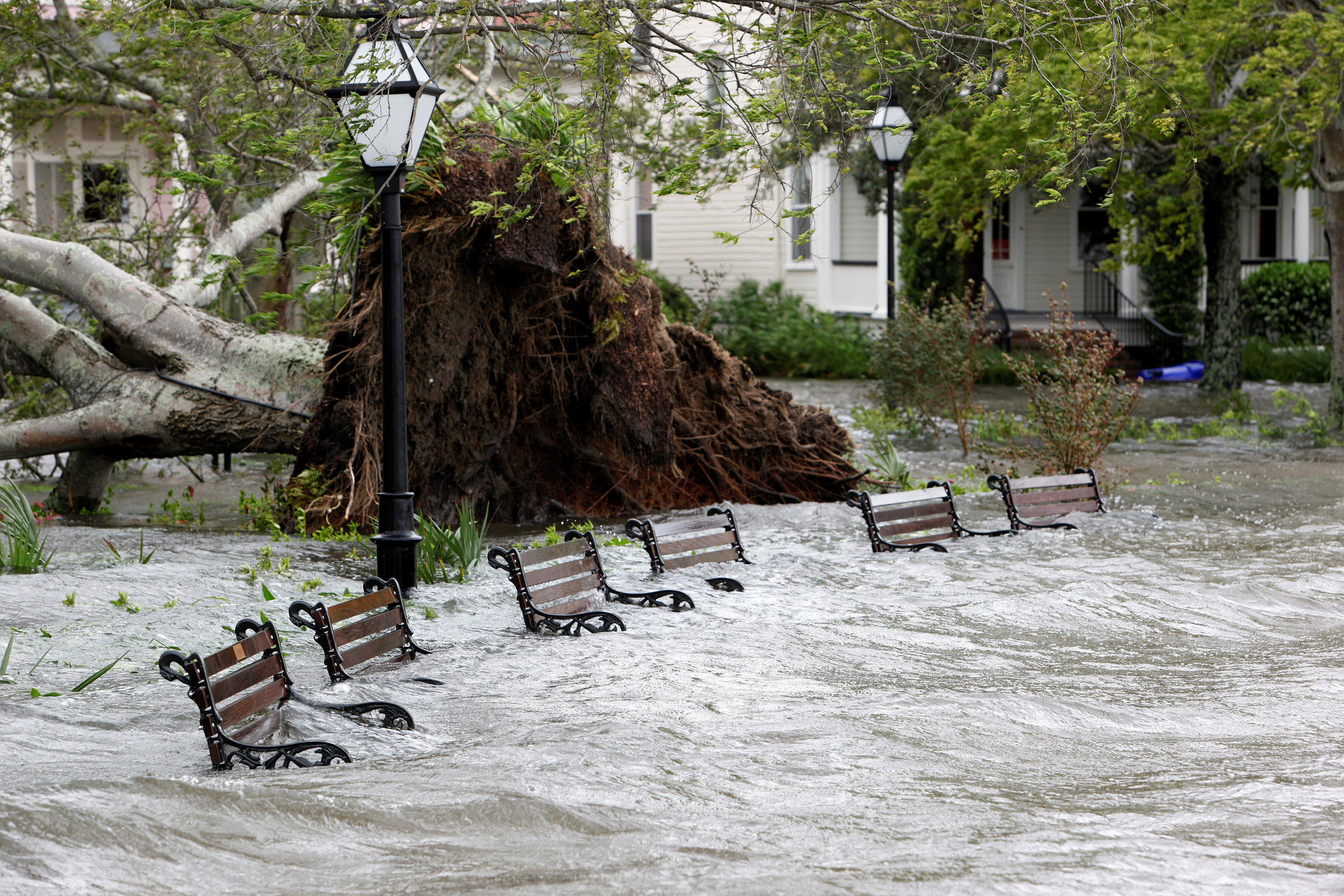 CHARLESTON, S.C. A weakening Hurricane Matthew lashed Georgia and the Carolinas on Saturday in what appeared to be the last leg of its march up the East Coast, leaving in its wake millions of Americans relieved that one of the most fearsome storms on record in the U.S. wasn’t that bad after all.

The hurricane was blamed for at least 10 deaths in the U.S., including that of a 68-year-old Georgia man who died when two trees fell on his home. And hundreds were left dead in Matthew’s wake in Haiti.

By Saturday night, North Carolina felt the brunt of Matthew, with more than a foot of rain falling in the southeastern part of the state, causing life-threatening flash flooding, forecasters said. Homes, businesses and roads as far west as Raleigh were also damaged by the deluge.

But in many places along the Southeast coast, the damage consisted mostly of flooded streets, blown-down signs and awnings, flattened trees and power outages.

As the storm passed and the skies cleared, many people were already cleaning up, reopening their businesses or hitting the beach. The power started coming back on. And all three major theme parks in Orlando, Florida, including Walt Disney World, were up and running.

“We are all blessed that Matthew stayed off our coast,” Florida Gov. Rick Scott said. “We are blessed that we didn’t have a direct hit.”

Two people have died in Georgia as a result of Hurricane Matthew, CBS affiliate WTOC in Savannah, GA, confirmed Saturday afternoon as torrential rains continue to inundate the Mid-Atlantic Coast.

Both deaths were in Bulloch County, which is north of Savannah and off the coast. Both were from falling trees - one onto a car and another onto a mobile home.

From there, it was expected to veer out to sea, lose steam and loop back around toward the Bahamas and Florida, too feeble to cause any trouble.

For nearly its entire run up the coast from Florida, Matthew hung just far enough offshore that communities did not feel the full force of its winds.

Its storm center, or eye, finally blew ashore just north of Charleston on Saturday, but only briefly. And by that time, Matthew was just barely a hurricane, with winds of just 75 mph.

In Charleston, authorities say a wedding dress was among items that were taken in one of several burglaries in the area as the state felt the effects of Hurricane Matthew, CBS affiliate WCSC reports.

The Charleston Police Department sent a report at 8 a.m. on Saturday stating that there were five reported burglaries within the past 24 hours in the City of Charleston.

According to investigators, there was one burglary in downtown Charleston, two on James Island, and two in West Ashley.

“Investigators are trying to determine the exact facts for these burglaries and if they are related since they are not isolated to one area of the city,” CPD officials said.

According to police, there have been messages posted on social media about numerous incidents of looting occurring throughout the city.

“These five reported events over the past 24 hours are under investigation and the exact relationship to storm activities is unknown at this time,” police say.”Investigators are working to establish any connection between these incidents.”

CPD officials said the department is conducting proactive patrols to protect the property and the citizens of the city of Charleston.

“Officers are being assigned to specific areas for added security. Citizens are encouraged to dial 911 to report any suspicious activity,” police said.

Within an hour of residents being allowed to return Saturday to Jacksonville Beach, Florida, David Villmow had fired up the two pizza ovens at his beachfront restaurant, The Art of Pizza. He was hoping to start serving customers in a few hours.

“We got really lucky,” he said. “We could be looking at a whole lot worse. All you see are downed signs, downed fences, a few gas station sign letters missing.”

Matthew’s deadly potential was made all too clear in Haiti, where the hurricane roared ashore on Tuesday with terrifying 145 mph winds. At least 470 people were reported dead in one hard-hit district alone, with other devastated areas still unreachable four days later.

An estimated 2 million people in the Southeast were ordered to evacuate their homes as Matthew closed in. By hugging the coast, the storm pretty much behaved as forecasters predicted. A shift of just 20 or 30 miles could have meant widespread devastation.

While Matthew’s wind speed had dropped considerably by the time it hit the Southeast coast, the storm will still go down as one of the most potent hurricanes on record, based on such factors as wind energy and longevity, and one of the most long-lived major hurricanes, too.

The storm swamped the streets of Savannah, a historic town of moss-draped squares and antebellum mansions. A homeless woman was seen staggering through waters up to her neck. She made it across safely.

A Coast Guard helicopter crew also rescued a man stranded on a sailboat in a river near Georgia’s Tybee Island. And North Carolina officials said they had to rescue numerous people from cars and homes.

The streets of Charleston - a city of handsome pre-Civil War homes, church steeples and romantic carriage rides - were also flooded.

“It’s not as bad as maybe I was expecting,” said Leigh Webber, who watched from her porch in the city’s historic district.

“I feel badly for a lot of the businesses downtown that have been closed since Wednesday,” she added. “I noticed a lot of hotels were completely closed. I know some weddings were canceled and it was a huge financial loss for a lot of people.”

South Carolina’s golf-and-tennis resort Hilton Head Island also took a blow as the eye of the storm passed 20 miles to the east. At least one gust of 87 mph was recorded at Hilton Head.

The two roads onto the island of 40,000 people were blocked by fallen pine trees, and many roads were under water.

All access points to Georgia’s St. Simons Island from the mainland were blocked. Tybee Island also took a beating, with gusts clocked at 93 mph.

Four deaths were blamed on the storm in Florida, three in Georgia and three in North Carolina. The deaths included an elderly Florida couple who died from carbon monoxide fumes while running a generator in their garage and two women who were killed when trees fell on a home and a camper.

The storm raked yet another historic Southern city on its way up the coast: St. Augustine, Florida, which was founded by the Spanish in the 1500s and includes many historic homes. The city was left awash in rain and gray seawater Friday.

Property manager Nick Trunck went to check on check on several stores and apartments. He said the damage consisted of little more than several lost shingles, a lost awning and water seeping into one area.

Trunck had arranged for 10 men to come from Connecticut to help with the cleanup, but after getting a look at the damage, he said he could probably get by with “a couple of guys and a mop.”

Property data firm CoreLogic projected the storm would cause $4 billion to $6 billion in insured losses on home and commercial properties. That compares with Hurricane Katrina’s $40 billion and Superstorm Sandy’s $20 billion.