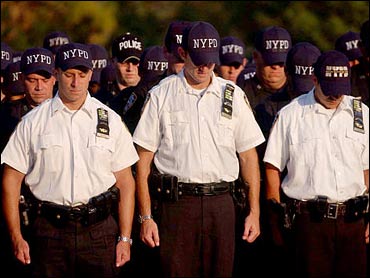 Weeping relatives marked the fourth anniversary of the Sept. 11 attacks with prayers, solemn remembrances and heartfelt messages to their dead brothers and sisters at the site where the World Trade Center collapsed in a nightmarish cloud of dust and debris in 2001.

In a Sunday ceremony lasting longer than four hours, more than 600 relatives read the names of the 2,749 victims who died at the trade center. Several blew kisses to the sky after reading a loved one's name, while others left the microphone sobbing. Several held up photos of their loved ones.

"We miss you Charlie and we love you, your boys will always remember," Peggy Garbarini told her brother, Fire Lt. Charles William Garbarini, who was 44 when he died at the trade center.

The ceremony came as Hurricane Katrina left Americans once again struggling with a catastrophe that caught the nation unprepared and left citizens dead and grieving. Mayor Michael Bloomberg opened the ceremony with words of condolence for those devastated by the hurricane.

CBS News correspondent Randall Pinkston reports that in New Orleans, 500 New York and New Jersey police officers who survived the Sept. 11 attacks are now helping New Orleans get back on its feet. They stopped to remember as the names of fallen officers were read.

New York firefighters helping with the relief effort gathered around a makeshift memorial for their fallen comrades, accepting the gift of a bell from a nearby church whose steeple was destroyed in the storm. Rescue workers in Biloxi, Mississippi, took a break from searching for the storm's missing to remember those who died on Sept. 11.

For the local emergency workers, honoring their New York comrades while dealing with their own destruction was particularly important. "Now we can relate," said Deputy Biloxi Fire Chief Kirk Noffsinger.

At ground zero, the names of the dead echoed across the site one by one.

"You're taking care of us from heaven but someday we'll be together," Iliani Flores said, choking up and raising her face to the sky in memory of her younger brother, a fire department paramedic.

"My big sister, my better half, life will never be the same without you," Rolando Moreno said to Yvette Moreno, who worked for a brokerage in the north tower.

As the names were read, weeping mourners filed down a ramp to a reflecting memorial pool at the floor of the site, which remains virtually empty four years after the attack. Families filled the water with red, orange and yellow roses, some shaking as they inscribed dedications on the wooden edge of the pool.

"Mom and Dad ache for you every minute," Linda Giammona-Julian said to her brother, Vincent Giammona, one of 343 firefighters killed. "We love you and we miss you; til we meet again."

Secretary of State Condoleezza Rice read a poem by Christina Rossetti after the second moment of silence.

"We all stand together to help each other and to help those who need our help in the future," Giuliani said. "We remember forever all the brothers and sisters that we lost on that day."

In Washington, President George W. Bush marked the anniversary with his wife on the South Lawn, and thousands of people marched in remembrance of the attacks and in tribute to troops fighting overseas.

And in southwestern Pennsylvania, about 1,000 people attended a memorial service in the field where Flight 93 crashed after it was hijacked by terrorists.

"The first heroes of 9/11 were here," said Brian Rohrbaugh, who brought his wife and young children to remember the 40 passengers and crew who died as they struggled with hijackers for control of the plane.

Parents and grandparents read the victims' names at ground zero last year, while children's voices were heard in 2003. A selection of politicians, relatives and others read the names on the first anniversary.

Two light beams inspired by the twin towers were to shoot skyward Sunday night in an echo of the towers' silhouette. The "Tribute in Light" will fade away at dawn on Monday.