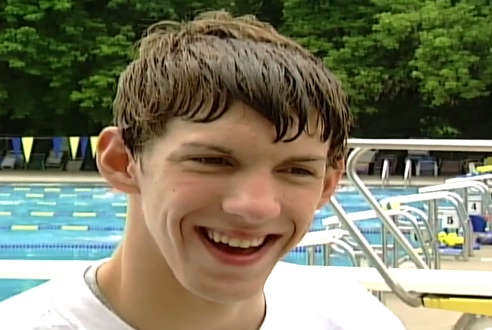 BALTIMORE -- Before he was a household name, and the most decorated Olympian of all time, Michael Phelps was a 15-year-old boy living in Baltimore, Maryland, with a passion for swimming and the hopes to one day win Olympic gold.

In 2001, CBS Baltimore interviewed the young Phelps, who was already a world record holder and making a name for himself in the world of swimming.

With the Rio Olympics in full swing and Phelps' overall gold medal tally at 21, CBS Baltimore pulled the more than decade-old interview from the archives.

At just days shy of his 16th birthday, Phelps seemed to have his sights set on the ultimate prize.

"I guess one of my long term goals is to win the gold medal in Athens," he said. "I mean I have a lot of goals. I think that I want to take it day-by-day."

Phelps also had some non-swimming goals too.

Phelps acknowledged during the interview he wasn't exactly a "normal" teenager. By this time, he was beginning to travel the world for swimming, and had just competed in the Sydney Olympics.

"I guess I give up a lot of things," he said. "But I am getting tons of other things that normal 15 year old's aren't getting."

Phelps told CBS Baltimore he believed he was living a life "anyone could dream of."

"And I'm definitely loving it," he said.

"In general, he comes in everyday, early. He's prepared to train, and he gives an honest effort all the time," said Bowman of Phelps.

At the end of the interview, Phelps shared his goals for the future: "I just want to get faster."

And that he did.