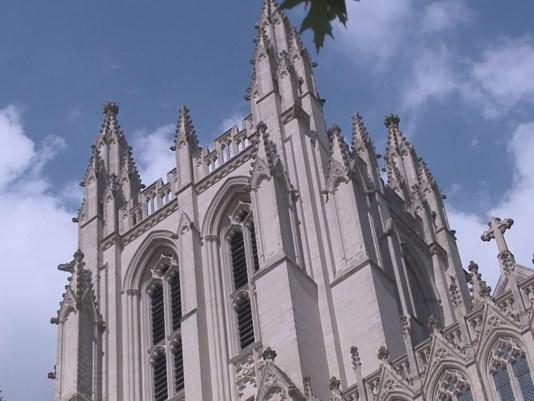 Cathedral authorities announced Wednesday that windows depicting generals Robert E. Lee and Thomas "Stonewall" Jackson will be removed and stored pending a decision about their future.

A cathedral statement says the images are "inconsistent" with its mission and "a barrier to our important work on racial justice and racial reconciliation."

CBS affiliate WUSA in Washington, D.C., posted the statement in its entirety.

"After considerable prayer and deliberation, the Cathedral Chapter voted Tuesday to immediately remove the windows," Rev. Mariann Edgar Budde wrote. "The Chapter believes that these windows are not only inconsistent with our current mission to serve as a house of prayer for all people, but also a barrier to our important work on racial justice and racial reconciliation. Their association with racial oppression, human subjugation and white supremacy does not belong in the sacred fabric of this Cathedral."

The windows have been a topic of debate for two years. Removing them was first proposed after the June 2015 racially motivated shootings in Charleston, South Carolina. Cathedral officials say they have been debating ways to potentially keep the windows but "contextualize" their historical meaning. But the statement says the issue gained new "urgency" after the recent, violent white supremacist rally in Charlottesville, Virginia.