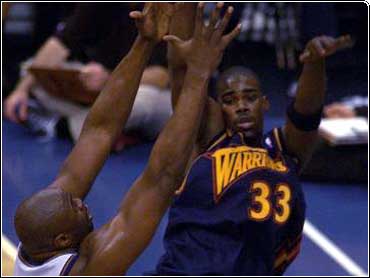 Golden State Warriors forward Antawn Jamison is expected to miss the rest of the season after undergoing arthroscopic surgery on his left knee Tuesday in Los Angeles.

Jamison, who leads the Warriors in scoring (19.6) and is second in rebounding (8.3), sprained his left knee on Feb. 4 but played three more games before aggravating the injury on Feb. 9 against Miami. He skipped the All-Star weekend as a result of the injury.

Jamison will be on crutches for the next few days before beginning a rehabilitation program.

"I don't want to speculate. Let's see how the therapy goes," coach Garry St. Jean said. "The key is that everything went well and he'll be ready for the summer program as well as next year."

The Warriors had been eager to see how Jamison and newly acquired guard Larry Hughes work together.

But nobody in the organization wants to rush Jamison back just to see him play the last week or so this season for a team not going to the playoffs.

Jamison, the fourth overall pick in the 1998 draft out of North Carolina, doesn't need to prove anything to anybody this season, anyway, St. Jean said.

"I think Antawn established himself this year," St. Jean said. "He created an identity for himself. And I think he sees now what he's capable of doing."