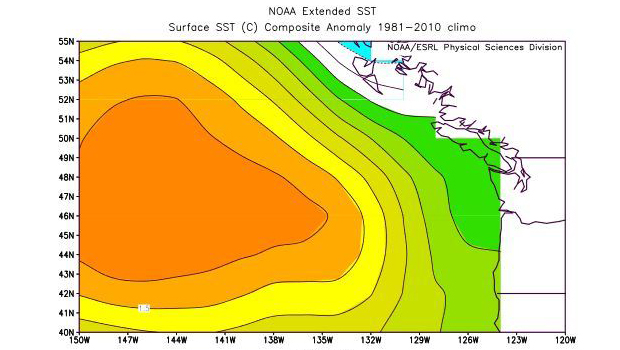 A blob of warm water in the Pacific Ocean may be to blame for some of the bizarre weather in the United States this year, a new study suggests.

From the dry spell in the West to the East Coast's endless snow season, the country has seen its share of weird weather so far in 2015. For that, scientists say, you can thank (or curse) a long, skinny blob in the Pacific Ocean about 1,000 miles (1,600 kilometers) off the West Coast, stretching all the way from Mexico to Alaska.

"In the fall of 2013 and early 2014, we started to notice a big, almost-circular mass of water that just didn't cool off as much as it usually did. So by spring of 2014, it was warmer than we had ever seen it for that time of year," study co-author Nick Bond, a climate scientist at the University of Washington, said in a statement.

This warm blob, which is about 2 to 7 degrees Fahrenheit (1 to 4 degrees Celsius) warmer than the usual temperature for this region, means the winter air that crosses over the Pacific Ocean wasn't cooled as much as it normally would be. That, in turn, spelled warmer, dryer conditions for the West Coast. [Fishy Rain to Fire Whirlwinds: The World's Weirdest Weather]

Scientists first observed the patch of warm water in June 2014, when Bond noticed that Washington state had experienced a milder winter than usual. At that point, the warm patch stretched about 1,000 miles (1,600 km) in each direction and was 300 feet (91 meters) deep.

Since then, the warm blob has persisted, though it has become a long, skinny finger of water instead. In a study published Monday (April 6) in the journal Geophysical Research Letters, Bond and his colleagues argue that a high-pressure ridge above the Pacific Ocean over the past two winters had led to calmer seas. Without roiling waters to transfer heat to the cold air above it, the ocean remained warmer than usual, the team concluded.

People can also thank the blob (in part) for the drought conditions experienced in California, Oregon and Washington this year. As the air cycles over the warmer water, it heats up and brings less snow, translating into drier conditions inland.

What's more, this warm blob has been disrupting ocean ecosystems, the researchers said. For instance, fish have been spotted in new waters, in part because they lack the normally nutrient-rich, cold waters that upwell from deep in the ocean. Skinny and dying sea lion pups and seabirds have been washing ashore off California's coast, according to the "Annual State of the California Current Ecosystem Report."

East Coasters can blame wonky ocean temperatures off the Pacific for all those weeks spent shoveling snow, according to another study published March 19 in the journal Geophysical Research Letters. A decadal pattern called the North Pacific Mode, a pattern of higher-than-average sea-surface temperatures that snakes from the tropical Pacific to the waters off coastal California to the northern Pacific, caused the weird weather. The pattern sent rivers of cold, wet air into the Midwestern and East Coast states, while forcing hot dry air across the American West, the study found.

"Lately, this mode seems to have emerged as second to the El Niño Southern Oscillation in terms of driving the long-term variability, especially over North America," said study author Dennis Hartmann.

This same climate variability helped create the warm blob, and has been getting progressively more influential on global weather patterns since 1980, the study found.