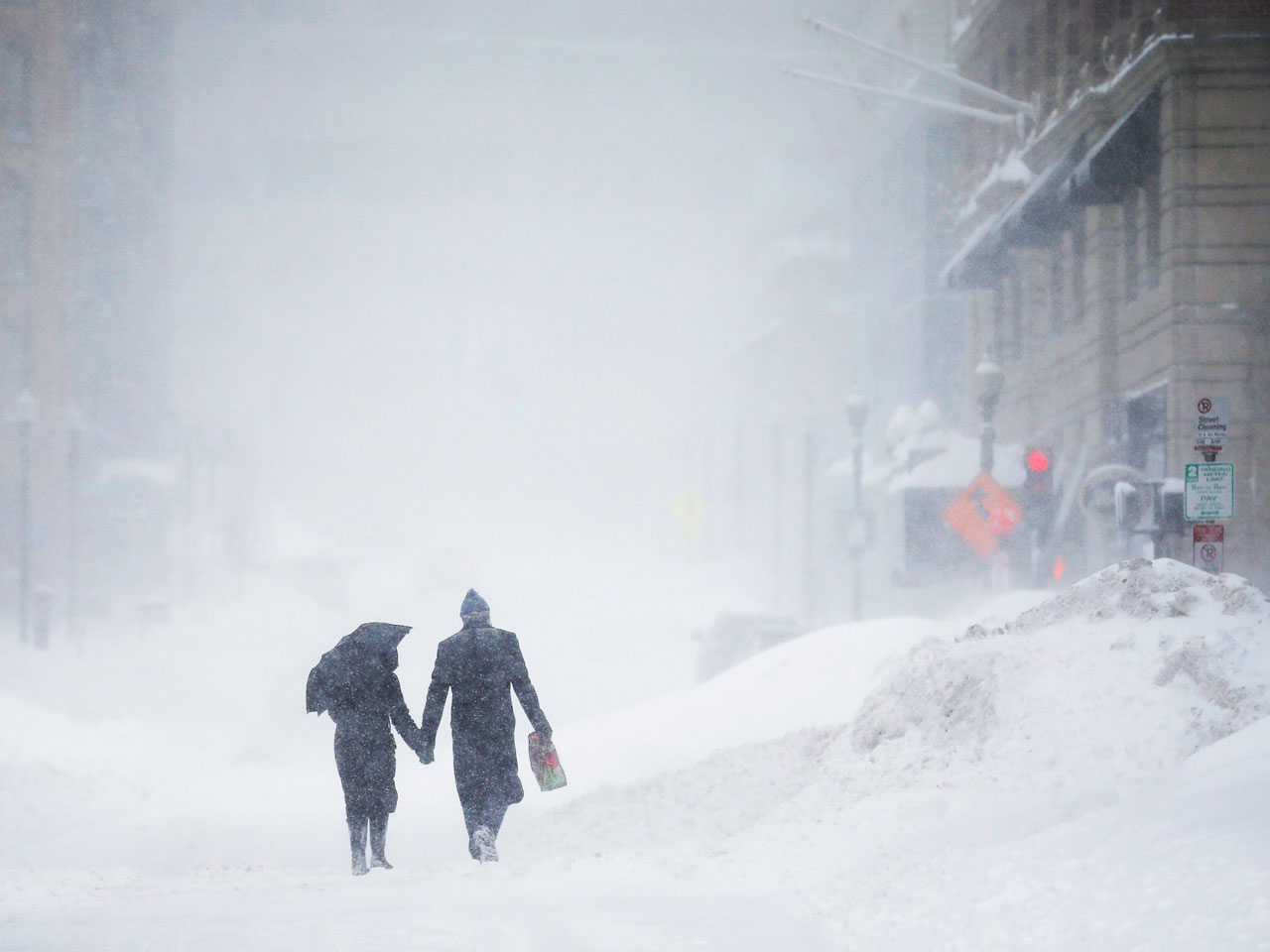 BOSTON - Snow and dangerously high winds roared across parts of New England in the dark of night to face an army of road crews and emergency workers Sunday, who had readied themselves for the fourth winter onslaught in less than a month. The odds favored the ominous weather.

The latest storm brought a new round of wind-whipped snow to New England, accompanied by near-whiteout conditions and lighting strikes in coastal areas.

A blizzard warning was in effect for coastal communities from Rhode Island to Maine, with no reprieve in sight: A bone-chilling blast of cold, with lows of minus-10 degrees was in the Sunday night forecast in parts of the region.

More than 6 feet of snow already stood in some areas from previous storms; a blizzard warning was in effect for coastal communities from Connecticut to Maine into Monday; and a bone-chilling blast of cold, with lows of minus 10 degrees was in the Sunday night forecast in parts of the region.

Boston is about to set the record for the snowiest month ever recorded since records started being kept in 1891, reports CBS News correspondent Jericka Duncan.

If Boston gets more than 10 inches, as predicted, it will have seen more snow in the past three weeks than Chicago has ever had in an entire winter.

Heavy snow had moved into parts of eastern Massachusetts by early Sunday, according to National Weather Service meteorologist Alan Dunham.

Three to eight inches of snow had fallen across parts of the region with the heaviest in Boxford in Essex County, which recorded 13 inches, Dunham said. Boston was also getting hit with heavy snow. Winds across the area were also increasing in intensity.

Before it is all over, southern New England could get several more inches and Maine could see up to 2 feet, weather forecasters said.

"On Sunday, the best thing people can do is stay home, stay indoors," said William Babcock, another weather service meteorologist.

"I can't stress this enough," Baker said. "Please stay off the roads ... so the crews can do the work they need to do to remove this snow."

Transportation officials in the region had taken precautions. Nearly 400 Sunday flights were canceled at Boston's Logan International Airport, and none was scheduled Sunday morning.

"Once the winter weather passes, airlines will begin re-accommodating passengers affected by cancellations and delays," Massport officials said, according to CBS Boston. "Even after the snow stops, high winds and strong gusts could limit the ability of airlines to resume normal operations."

The Massachusetts Bay Transportation Authority canceled all rail, bus and ferry service in the Boston area on Sunday.

So far, however, there have been limited power outages reports, CBS Boston reports.

Ahead of the storm, forces gathered to remove piles of snow and ready for the next round.

Massachusetts called up hundreds of National Guard troops to assist with snow removal, and the Hanscom Air Force base outside Boston became a staging area for heavy equipment pouring in from eight other Northeast states to help in the effort.

Empty parking lots have become "snow farms." Workers are shoveling off school roofs to avoid more collapses. They simply don't know where to put any more snow -- but it's coming.

At the University of Connecticut, where up to 8 inches of new snow was expected, Gavin Paquette was part of a 12-man crew shoveling snow off roofs.

"There was about an 8-foot snow bank up on the roof," he said of the school's football training center. "It's all wet, heavy snow."

Paquette said all the work that's come to him with the storms this winter is keeping him in shape. "I've lost nine pounds since Wednesday," he said.

In southern New Hampshire, where forecasters called for up to 18 inches of new snow, employees at a tree service volunteered to clear snow from the roof of Londonderry South Elementary School. Dave Burl of Accurate Tree Service told WMUR-TV the roof was engineered to hold 44 pounds per square foot, and the weight was already approaching 30 pounds per square foot.

The bad weather going into the weekend spanned several states - winter storm warnings extended west into Michigan and Ohio, where whiteout conditions led to a pileup on the Ohio Turnpike that killed at least two people. Another storm-related crash on the New York Thruway south of Buffalo killed one person.

Since the day promised to show little love, Baker proclaimed "Valentine's Week" in Massachusetts and encouraged people to celebrate the holiday by buying gifts and dining out all this week.