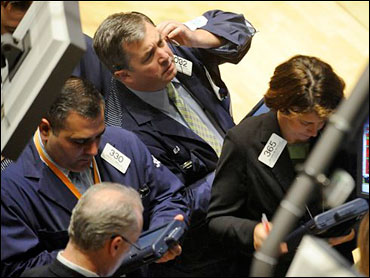 The Dow Jones industrials recovered from an initial drop of nearly 200 points to finish up about 21 points. The broader Standard & Poor's 500 and Nasdaq composite indexes ended lower as investors bailed out of investment banks and small-cap stocks and fled instead to large companies apt to be reliable during a weak economy.

The buyout of Bear Stearns was certainly more appealing than the alternative: letting the investment bank collapse and causing huge losses for anyone linked to it. And some unprecedented moves by the Federal Reserve gave investors a bit of solace on what many predicted would be a day of precipitous losses in the stock market.

Besides supporting the buyout, the Fed lowered the rate it charges to loan directly to banks by a quarter-point on Sunday night - two days before its scheduled meeting Tuesday. The central bank also set up a lending option for firms, including many non-bank financial services firms, to secure short-term loans for a broad range of collateral.

The Fed appears to be pledging to do everything in its power to keep the credit crisis from decimating the financial industry and the economy. Policy makers at the central bank are expected to reduce the target fed funds rate - the rate banks charge each other for overnight loans - by at least a half-point on Tuesday, and perhaps even a full point.

But the market remained extremely volatile. The sale of Bear Stearns - at a minuscule $2.21 a share as of Monday's close, or a total of $260.5 million - stirred fear among investors worldwide about other banks' exposure to the troubled credit markets.

A little more than a year ago, Bear Stearns was selling for more than $170 a share, reports CBS News correspondent Anthony Mason. But the company's heavy investments in mortgage securities eroded the market's trust.

"You're going to have some very weak players pushed out of business," said Joseph V. Battipaglia, chief investment officer at Ryan Beck & Co. He said JPMorgan's buy of Bear Stearns and Bank of America Corp.'s acquisition of mortgage lender Countrywide Financial Corp. are probably not the only rescues the industry will witness during this credit crisis.

Declining issues outnumbered advancers by about 5 to 1 on the New York Stock Exchange, where volume came to 2.00 billion shares.

Bond prices rose as stocks fell. The yield on the benchmark 10-year Treasury note, which moves opposite its price, fell to 3.35 percent from 3.44 percent late Friday.

"The market has absolutely no idea what's going on," said Dan Alpert, managing director of Westwood Capital. "Some people have accused them of whistling past the graveyard - I don't think they even know where the graveyard is."

He added that short-covering - the unwinding of bets that stocks will fall - ahead of Tuesday's Fed meeting contributed to the market's atypical movements.

But the pain for stockholders in Bear Stearns, which succumbed to losing bets on souring mortgages for borrowers with poor credit, will be sizable. JPMorgan is buying Bear, including its midtown Manhattan headquarters, for about 1 percent of the investment bank's worth little more than two weeks ago. Bear Stearns' buyout arrives after a short-term bailout Friday organized by the Fed and involving JPMorgan.

Bear Stearns shares fell 86 percent to $4.10 - still above the buyout price, implying that some shareholders believe the deal terms might change.

Shareholders of Bear Stearns have filed a class action suit against the management which only last week insisted the company was sound reports Mason. Nearly a third of Bear Stearns is owned by its employees. Not only has their savings been wiped out but more than half of the 14,000 workers reportedly could be fired.

Some investors worry Lehman Brothers Holdings Inc. might be next to fall. Lehman - the investment bank considered most similar to Bear Stearns - and other major investment banks are slated this week to report quarterly results.

DBS Group Holdings Ltd., Southeast Asia's largest bank, reportedly instructed traders in an e-mail early Monday not to do business with the bank. According to Dow Jones Newswires, DBS Group later told traders to disregard the earlier e-mail. Lehman denied there were any problems with DBS.

While investors focused on the financial sector, fresh economic news offered little solace. The Fed said output at the country's factories, mines and utilities fell by 0.5 percent in February, the biggest decline last October. Many analysts had been expecting a slight increase of one-tenth of one percent.

The dollar sank to a record low against the euro and hit a 12 1/2 year low against the Japanese yen, while gold prices rose to another record high. Crude oil plunged from record levels by $4.53 to settle at $105.68 per barrel on the New York Mercantile Exchange.