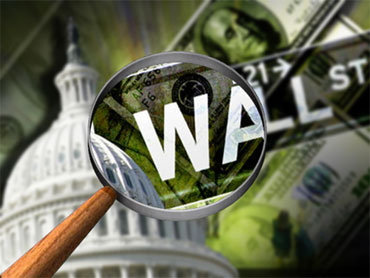 President Obama today hailed the progress Congress has made on financial reform legislation, calling it the most significant overhaul of the financial system since the Great Depression. Political and economic commentators, however, are so far expressing skepticism over how much good the bill will really do.

House and Senate negotiators last night pounded out an agreement over the final version of their sweeping bill, and they now hope to pass the final bill and send it to the president's desk by July 4.

The Economist magazine calls it a clear legislative victory for the White House with less clear implications for the financial market. And while the magazine says that the final bill is "a bit tougher on Wall Street than was the White House's original reform draft of a year ago," it also takes note of all that is lacking from the legislation.

"There is no dramatic streamlining of the alphabet soup of regulatory agencies," according to the Economist. "Indeed, the new consumer bureau potentially creates another monster. Nor does it tackle the future status of Fannie Mae and Freddie Mac, to the chagrin of Republicans, who rightly view the two mammoth mortgage agencies as having played a leading role in causing the financial crisis. The final document may run close to 2,000 pages, but some very important issues are being left for another day."

Daniel Foster at the conservative National Review Online argues that the bill is filled with unnecessary or useless measures.

"There is much in the bill that has nothing to do with 'Wall Street' or the root causes of the crisis (i.e. debit card and interchange fee rules)," Foster writes. "There is little in it that will 'reform' too big to fail or change the incentives for the kind of behavior that led to the crisis (implicit subsidies and bailout authority galore); and it was a 'compromise' mostly between Democrats."

Joshua Brown, a guest blogger for the Christian Science Monitor with more than a decade of experience in the financial sector, concludes that the bill is riddled with loopholes, making it a victory for Wall Street.

"Reading through the bill, I have to say, is a bit like watching Pulp Fiction or Goodfellas on TNT," Brown writes. "The plot is intact but the movie is still somehow rendered meaningless minus the blood, guts and f-bombs. No,Ray Liotta didn't just say 'Fudge You' and no, banks should not be taking deposits with one hand and rolling the dice with the other."

Author Les Lepold at the Huffington Post contends the havoc Wall Street wreaked on the economy is tantamount to the damage BP has done to the Gulf of Mexico, since both disasters were predictable and preventable, and there was not enough regulation in both cases. However, he laments that, unlike BP, Wall Street is getting off the hook.

"The many parallels and connections between the Wall Street and Gulf disasters end when it comes to how the government is handling these crises," he writes. "BP is paying a price for what it has done. Wall Street is being rewarded. (Populist rhetoric aside, the financial reform bill just announced will keep those rewards coming through a myriad of exemptions and loopholes. Too big to fail is here to stay.)"

Tim Fernholz at the liberal magazine the American Prospect concedes that the bill could be better, but he argues it is still a success.

"Will it fix serious holes in financial regulation and empower regulators?" Fernholz writes. "Will it limit risk and reduce bank profit? Does it include landmark provisions like a new consumer regulator and derivatives reform? Does it seriously diminish the potential for future bailouts? The answer to all of those questions is 'yes,' and that makes this legislation quite an accomplishment."