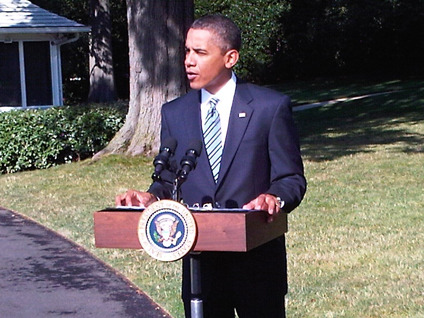 President Obama today praised Congress for making progress on a sweeping financial reform bill he said will make the financial system more transparent and eliminate the threat of banks that are "too big to fail."

"We are poised to pass the toughest financial reforms since the ones we passed in the aftermath of the Great Depression," the president said.

Representatives from the House and the Senate nailed down a final version of the bill in the very early hours of Friday morning, after a long night of negotiations. The Obama administration helped the group of lawmakers reach a compromise over a contentious provision regulating the derivatives market.

The House and the Senate must now both approve the final version and are aiming to get it to the president's desk before July 4. Asked whether the bill can pass the Senate, Mr. Obama answered, "You bet."

The bill, which impacts financial transactions ranging from personal debit card use to the trading of credit default swaps, "represents 90 percent of what I proposed when I took up this fight," Mr. Obama said.

The bill creates a new consumer protection agency, adds regulations to the payday lender and check casher industry, forces banks to spin off their riskiest derivatives trades, limits high-risk trading among banks, and imposes a fee on the biggest banks and hedge funds to pay for the costs of the bill.

Financial Reform Bill: What Made the Cut

The vote among the 43 House and Senate negotiators fell along party lines, with Republicans complaining the bill goes too far and addresses financial transactions that had nothing to do with the financial crisis.

He added, however, "We've all seen what happens when there's inadequate oversight and insufficient transparency on Wall Street."

The president commented on the progress of the bill before he left for Toronto to attend a series of international summits, the G8 focusing on peace and security and the G20 economic summit.

He said he hopes the nations of the G20 can build on the progress of previous conferences.

"We need to act in concert for a simple reason," he said. "Our national economies are inextricably linked."