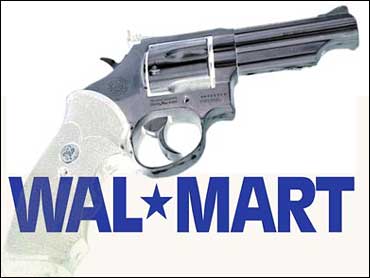 In two cases, a store sold guns to felons, according to Attorney General Bill Lockyer, who announced the agreement with the retail giant.

Wal-Mart's action comes after the chain announced in July that it had implemented a rule requiring customers to undergo a background check before buying rifles and shotguns — no matter how long the check takes.

In California, store employees released guns to customers before background checks were completed, Lockyer said, and failed to verify the identities of buyers through thumbprints and driver's licenses.

Other violations included failing to document sale of a firearms safety device with the gun.

"We need to do a better job and that's what we're going to do," he said.

Williams said store employees involved in the offenses will not be terminated.

He added it's the first time Wal-Mart, which sells rifles and shotguns — but not handguns — has suspended firearms sales in a state for such violations.

State and federal laws prohibit selling guns to felons or people convicted of domestic violence offenses. Sales are also banned to subjects of restraining orders and people with mental conditions that make them a dangerous to themselves and others.

The policy announced in July, which exceeds federal guidelines, came after Wal-Mart's own research showed that weapons it sold were being used in crimes.

Under federal law, background checks through the National Instant Criminal Background Check System are required for anyone attempting to purchase a gun. If the results are not returned within three business days, the dealer may complete the sale.