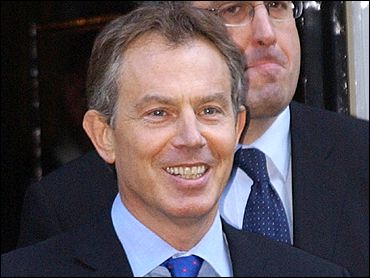 Blair's ministers acknowledged that the deeply divisive war had cast a shadow over the campaign.

With the results from 87 of the 166 local councils declared, Labor was down 215 seats, the main opposition Conservative Party had gained 108 seats and Britain's third largest party, the Liberal Democrats — which staked its campaign heavily on it being the only major party to oppose the war — gained 62 seats.

The British Broadcasting Corp projected that Labor would finish third with 26 percent of the total vote, behind the Conservatives at 38 percent and the Liberal Democrats at 30 percent.

The Sun said Labor had been "hammered" at the polls. The Guardian called in a "severe election blow."

"There is clearly a strong protest vote and we have to take account of what people are telling us," said Culture Secretary Tessa Jowell. "Iraq is certainly a factor."

"The feeling has been that Iraq has gone wrong," Home Secretary David Blunkett told the BBC. "As things come right, so people's perception of whether we were right or wrong will change."

Blunkett told the Guardian he was "mortified" by the returns. He said the Iraq war had "split the Labor party, split families and split friends".

Lib Dem leader Charles Kennedy said the focus on Iraq had paid off. "We have shown ourselves both to be a tough and a robust party on the biggest single issue confronting Britain for years," he told the BBC.

Britons voted in three polls, selecting representatives for the European Parliament, 166 local councils across England and Wales and for a London mayor. Results in the mayoral race were not expected until Friday evening, and the European ballot will be declared Sunday.

Local and European elections traditionally allow voters to vent their grievances about the party in power, and do not predict national election results. In local polls in 2000, the Conservatives gained 593 seats and Labor lost 568. The following year, Blair won a second landslide victory in national elections.

But Friday's results came after more a year of steady crisis for the prime minister, largely over the war in Iraq. And they come as the Labor party heads toward a referendum on the European constitution — a key test of the party's push to fuse closer ties with the rest of Europe — and a general election expected next summer.

Since early 2003, Blair has endured stiff opposition within his own party on votes authorizing the war, a dispute about pre-war intelligence, a row with the BBC over claims his government "sexed-up" a key WMD claim, the suicide of a government scientist involved in the BBC report, and the prisoner abuse scandal.

At several points in the past 18 months, Blair's ability to survive politically has been in doubt. In his book about the Bush administration's approach to the war, author Bob Woodward said President Bush was so afraid Blair's government would collapse that he offered to let Blair back out of a commitment to send British troops to Iraq. Blair refused.

The prime minister's travails over the war hastened speculation about his future. The Iraq war forced Blair's uneasy relationship with his party's left wing, which has always accepted the centrist Blair only begrudgingly, back to the surface. Having guided Labor to two stunning victories, it has always been unclear whether Blair would lead the party through the next elections.

"Only the most pessimistic of Labor managers had expected it to be quite this bad," wrote the BBC's Nick Assinder about Friday's election results. "Tony Blair was facing the real prospect that his leadership will now be a matter of serious debate amongst Labor MPs as they consider the consequences for their own seats in a general election."

According to an ICM poll released Friday, only 39 percent of respondents rated the prime minister as trustworthy, compared with 51 percent a year ago. Nevertheless, 63 percent believed he was a competent leader, down five points.

ICM surveyed 1,016 adults between June 4-6. The margin of error was plus or minus three percentage points.

Blair has been in the United States this week for the Group of Eight summit, and plans to attend Friday's funeral for former President Reagan in Washington.

The Conservatives may not reap the benefit from Labor's difficulties in the European elections, where some of its support has been captured by the upstart U.K. Independence Party.

UKIP, which advocates immediate British withdrawal from the 25-nation bloc, has tapped into a rich vein of British euroskepticism and is tipped to be a big winner when European results are announced Sunday. In the local polls, the vehemently anti-EU party gained its first ever council seat, in the northern city of Hull.

In the mayoral race, maverick socialist Ken Livingstone was favored to win re-election, this time as Labor's candidate. Livingstone was ejected from the party four years ago when, as an independent, he beat Labor's official candidate. He was readmitted earlier this year after it became clear Labor could not beat him.