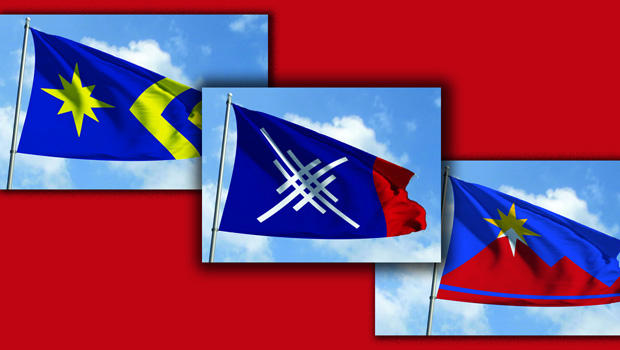 As Mo Rocca reported for "Sunday Morning" last September, the city of Pocatello, Idaho, has endeavored to pick a new city flag design, after the North American Vexillological Association declared their current flag (which incorporates both copyright and trademark symbols) the worst city flag on the continent.

"It violates all the principles of good flag design," admits Greg Gunter, whose marketing business created the artwork as a logo for a city pride campaign back in 2000, after which somebody literally ran it up the flag pole.

So Pocatello -- county seat of Bannock County, resting on the Portneuf River in the mountains of the Bannock Range -- recently called for submissions of new city flag designs.

After more than 700 entries were considered, the City of Pocatello Flag Design Ad-Hoc Committee narrowed down the choices to six, and is asking the public for their comments.

Be sure to visit the city's website to review the final designs and rate each one by June 30, 2017.

The six finalists are:

Your can read more about each Pocatello flag design and rate them here.

Walker Hayes on his "Fancy Like" success
David Morgan