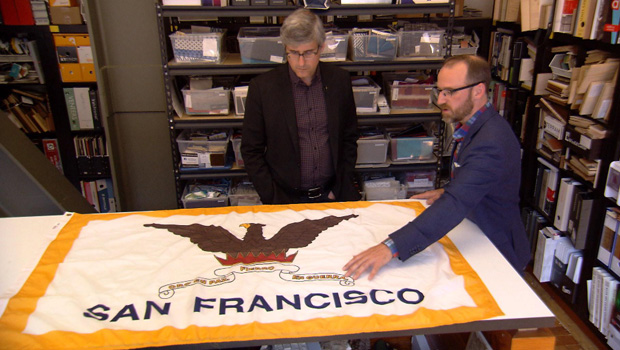 With its broad stripes and bright stars, our nation’s flag demands respect. But ask an expert (which is to say, a vexillologist) and it turns out that all flags are NOT created equal. Mo Rocca takes a closer look:

Pop quiz: What does your city’s flag look like? Admit it, you probably didn’t even know your city HAS a flag.

Roman Mars loves flags. He’s host of 99% Invisible, a hit podcast all about everyday design. But he says city flags may be one of the worst-designed things you’ve never heard of.

As for San Francisco, the city Mars makes home, well, its flag isn’t much better.

“The obvious things are, take off the words,” Mars said. “I would stylize the phoenix a little bit more.”

Mars collects flags he likes, from Ohio’s: (“It’s the only non-rectangular flag in the union”), to that of Zheleznogorsk, Russia (“This was a secret Russian town that made weapons-grade plutonium. So their flag was illustrated with a Russian bear splitting an atom”).

The study of flags is called vexillology. So, what is an expert on flags called? A vexillologist. That’s vex-il-lol-o-gist, with an extra “lol” in the middle.

There are five key principles:

“The first one is keep it simple, that a child should be able to draw it from memory,” said Mars. “The second one is use meaningful symbolism. Third one is use two to three basic colors.

“The fourth one is no lettering, no writing of any kind. And the fifth one is be distinctive, or be related in sort of a group of flags. For example, the Scandinavian countries all have an offset cross.”

Remember, a good flag makes a clear statement when seen from hundreds of feet away -- on land or at sea.

“It’s a great piece of design, because what it was meant to do was to scare people so much that they didn’t fight,” he said.

Last year Mars gave a TED Talk on city flag design. He showed a bunch of flags that vexillologists call “SOBs”: “’Seals on a bedsheet.’ And if you can’t tell what city they go to, yeah, that’s exactly the problem!”

It inspired efforts in dozens of cities -- from South Bend, Indiana, to Bowling Green, Kentucky -- to redesign their flags.

But as hopeless as bad city flags are, they can’t compare to Pocatello, Idaho’s, which the North American Vexillological Association declared the worst city flag on the continent.

“It violates all the principles of good flag design,” said Greg Gunter, the man responsible for its design, which includes both copyright and trademark symbols.

To be fair, Gunter’s marketing business designed the artwork as a logo for a city pride campaign back in 2000; then, somebody literally ran it up the flag pole.

“This art was never intended as a flag?” Rocca asked.

That flag was taken down years ago, and a local committee is now working on a redesign. It’s an issue the entire city is rallying behind, including Mrs. Delones’ fourth-grade class.

Rocca asked some young Pocatellans for some of their ideas.

“I drew a potato, for the state vegetable,” said Karina.

Pocatello plans to reveal its new flag early next year.

As for Roman Mars, he hopes one day to see a better flag flying over San Francisco, but for now he says efforts for a vexillogical victory are in vain.

“The city is not all that interested because, you know, they have a lot of problems to solve,” Mars said.

“Well, you gotta hand it to Pocatello,” said Rocca.

San Francisco, take note: Pocatello may not have a Golden Gate Bridge, but they get stuff done!