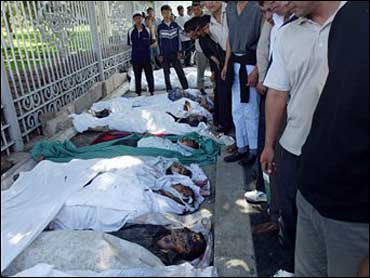 Eight Uzbek soldiers and three Islamic militants died in a clash near the Kyrgyz border Sunday and more than 500 Uzbeks fled to safety across the frontier, witnesses said, in spreading violence that further threatened stability in this Central Asia country, a key American ally and host to an important U.S. military outpost.

The explosions of pent-up anger have now hit at least two Uzbek border towns in the volatile Fergana Valley. As many as 500 people reportedly were killed Friday in Andijan, Uzbekistan's fourth-largest city about 30 miles west of the Kyrgyz frontier, when government troops were called in to put down an uprising by alleged Islamic militants and citizens protesting dire economic conditions.

In London, British Foreign Secretary Jack Straw said Sunday there had been rights abuses in Uzbekistan. "The situation is very serious; there has been a clear abuse of human rights, a lack of democracy and a lack of openness," he told British Broadcasting Corp. radio.

The Uzbek government rejected the criticism. "From where has Jack Straw learned that law enforcement had 'opened fire on demonstrators' if that did not take place at all," the Foreign Ministry said in a statement.

The United States faces a quandary in responding to the violence because of its ties to the Karimov government and its air base in the country. So far U.S. authorities have only called on both sides to work out their differences peacefully.

About 500 bodies were laid out in rows at an Andijan school, according to a respected doctor in the town, seeming to corroborate other witness accounts of hundreds killed in the fighting. Relatives were arriving at Andijan's School No. 15 to identify the dead, said the doctor, who spoke by telephone on condition she not be named.

The doctor, who also said about 2,000 people were wounded, is widely regarded as knowledgeable about local affairs. She did not say how she arrived at her estimate.

Security was tight in Andijan as stunned residents cleaned blood off streets guarded by troops and armored vehicles. One man said he saw the bodies of three people apparently killed by a soldier Sunday, two days after government forces put down the uprising.

"The city was burying its victims throughout the entire day, and the people are very angry at the president for his order to open fire at protesters," said the man, who asked to be identified only by his first name, Ilkhom.

The Uzbek Foreign Ministry on Sunday denied that government forces had opened fire on demonstrators. President Islam Karimov has said 10 government soldiers and "many more" protesters died in the Friday conflict and at least 100 people were wounded.

Since then the government has imposed a near-total news blackout on the region, keeping reporters away from scenes of violence.

Karimov, viewed as one of the most authoritarian leaders still in control of a former Soviet republic, cut his political teeth under the old communist system which brooked no civil disobedience. Before the Soviet Union fell apart in 1991, many regional leaders had ordered military or police attacks against their own people when they massed in protest in places like Georgia, Azerbaijan and Kazakhstan.

But if the estimates of 500 dead hold true and if Uzbek forces were behind the killing — as most reports indicate — Friday's violence would be one of the worst incidents of state-inspired bloodshed since the massacre of protesters in China's Tiananmen Square in 1989.

Karimov has blamed Islamic extremists for the uprising, in which protesters stormed a prison, freed inmates and then seized local government offices before government troops put the protest down with force. The violence was Uzbekistan's worst since gaining independence in 1991.

Reports of 11 dead Sunday in fighting in the border village of Tefektosh could not be confirmed, but blood stains were visible on the streets. One villager said eight government soldiers were killed, another said three civilians also died. Other accounts said more than 500 people, including militants, crossed into Kyrgyzstan after the clash.

In Korasuv, another border community, the village was strewn with the charred remains of police cars Sunday and the streets littered with documents from torched government offices.

An estimated 5,000 people went on a rampage a day earlier and forced authorities to restore a bridge across a river that marks the border with Kyrgyzstan. The bridge had been closed more than two years ago by the government, and locals saw the closing of it and other river crossings as an attempt to deny them access to the better-developed economy and more open politics of Kyrgyzstan.

"It was a popular uprising. There were no terrorists here, just ordinary people," said Furkat Yuldashev, 32, as he stood with other townspeople near the bridge.

But villagers remained angry even with the bridge restored.

"It's necessary to get this ruler out," said a 75-year-old man named Umarjon-Aka, dressed in a traditional black robe and dark blue hat. "For how long they can torment the people?"

He, like many others in Korasuv, voiced sympathy for the victims of Andijan violence and expressed anger at accounts of the events by Uzbekistan's tightly controlled news media.

"People have done that, and they (the authorities) keep calling them terrorists," Umarjon-Aka said. "Now more people will rise up."

No government forces were visible around Korasuv on Sunday, apparently reflecting the authorities' reluctance to engage in another conflict.

In Andijan, the square that was the scene of Friday's bloodshed was empty Sunday, according to the doctor who reported 500 were killed by government forces. But reporters trying to enter the city heard bursts of automatic weapons fire on the outskirts late in the day. Police officers at a checkpoint dropped to the ground and fired in the direction of the shooting.

An Andijan resident reached by phone said gunfire could be heard briefly near the city market in the afternoon. The resident, who asked not to be named, said that scores of troops backed by armored vehicles were deployed around the main avenues.

A U.N. refugee agency team went to Suzac, Kyrgyzstan, 50 miles northeast of Andijan. Most of the 560 Uzbeks who arrived there Saturday were men, and 18 were wounded, the agency said.