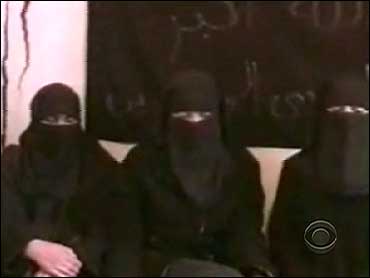 According to the U.S. military in Iraq, women have carried the bombs in at least 27 attacks so far this year - more than triple the number of female suicide bombers in all of 2007, reports CBS News correspondent Richard Roth.

A joint assessment by the FBI and the Department of Homeland Security obtained by CBS News says the statistics reflect a growing combat role for females, aided by the fact that bombs are easy to hide under traditional women's clothing.

"It's much more difficult to inspect a female Muslim woman than it is a male Muslim because of religious sensitivities," said Steven Emerson, of the Investigative Project on Terrorism.

Iraqi efforts to train and deploy more female police and security guards haven't countered the threat, though policewomen like Rafal Haziem Ali say it's their job to keep trying.

Revenge may have motivated some women bombers, who strapped on explosives after a husband, brother or son died fighting.

But as with the young woman from Gaza who flinched when she tried to detonate her bomb at an Israeli checkpoint and despaired when it failed to go off or the Sri Lankan who sat down in a welfare office and blew herself up, what's happening in Iraq reflects another fact of modern war and terror - there's no enemy deadlier than one bent on suicide, male or female.