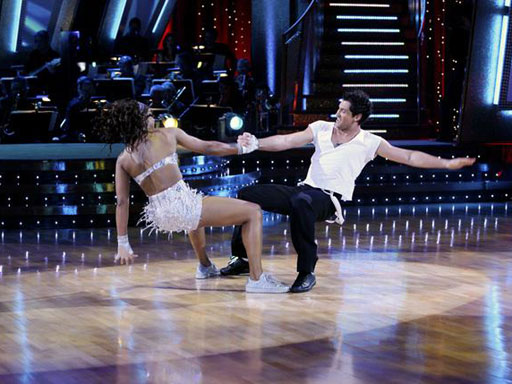 Riot officers seemed to meet with little resistance, although they continued to move down the street in formation, banging their shields with their batons. By late evening, police cleared out the area where most of the problems occurred.

Several people were apparently hit by rubber bullets, though the extent of their injuries was not immediately clear. A reporter for Phoenix TV station KPHO, Donna Rossi, was slightly injured when she was hit by a piece of metal, though it was unclear what it was, the station said.

"Now this is a riot," Assistant Police Chief Roberto Villasenor said as officers moved in to break up a crowd at a major intersection near the campus.

An estimated 2,000 fans spilled into the streets after Arizona lost the NCAA basketball championship to Duke in Minneapolis.

"Everybody started going nuts when they started shooting," said Robert Thacker, a university student. "I saw they looted stores. It was like a war zone."

Police said initially there were few problems and only a handful of minor arrests.


But then about a 1,000 people jammed an intersection near the campus and a bar, and a motor home and least three other vehicles were burned, some after having been overturned. Two other cars have been reported overturned earlier, along with small fires in parking lots and elsewhere.

"Right now, I'm just in shock," said Ian Tingen, another student. "I think what really started freaking out the kids was seeing all the police lined uand down the road."

With the damage escalating, police in riot gear ordered the crowd to disperse and then moved in shoulder to shoulder behind shields against which they beat their batons.

Later, police fired stun grenades to help disperse the crowd and fired rubber bullets, striking some individuals. At least one could be seen holding his head. There was no immediate word about injuries.

Arlene Leaf, owner of Tucson Thrift, which is in the area, said the windows of her shop were broken in the melee.

"It's just so very stupid, just sad and tragic," she said. "Right now I think of all the people in the world who have real problems and they're doing this over a game."

Earlier, a number of students threw at least three street lamp globes back and forth over the heads of the crowd. Two people were detained when street signs were torn down.

Police cordoned off the entire campus by closing streets to vehicular traffic, a precaution to avoid having motorists trapped, as some were during the 1997 postgame action when the Wildcats won the title.

Villasenor said there were several small fires along the main avenue, where he estimated about 2,000 people milled about at one point, and that there were four other small fires at Jefferson Commons, a student housing area about four miles away.

It was unclear how many cars were damaged. Police reported one overturned near the campus early on, and Pima County sheriff's deputies reported another was overturned about 10 miles away.

Police measures were intended to avoid a repeat of the traffic tie-ups and raucous celebrations that occurred after Arizona beat Kentucky in 1997 to win its first national championship.

That year, revelers overturned at least one car, scrambled onto rooftops and shattered windows on homes and vehicles, including a police car.

This year, police had an estimated 500 officers ready for postgame duty.

Meanwhile, the university planned a parade for Tuesday from Tucson International Airport to Arizona Stadium, the football field, with players and coaches riding in a double-decker bus. The team was scheduled to arrive around midday.