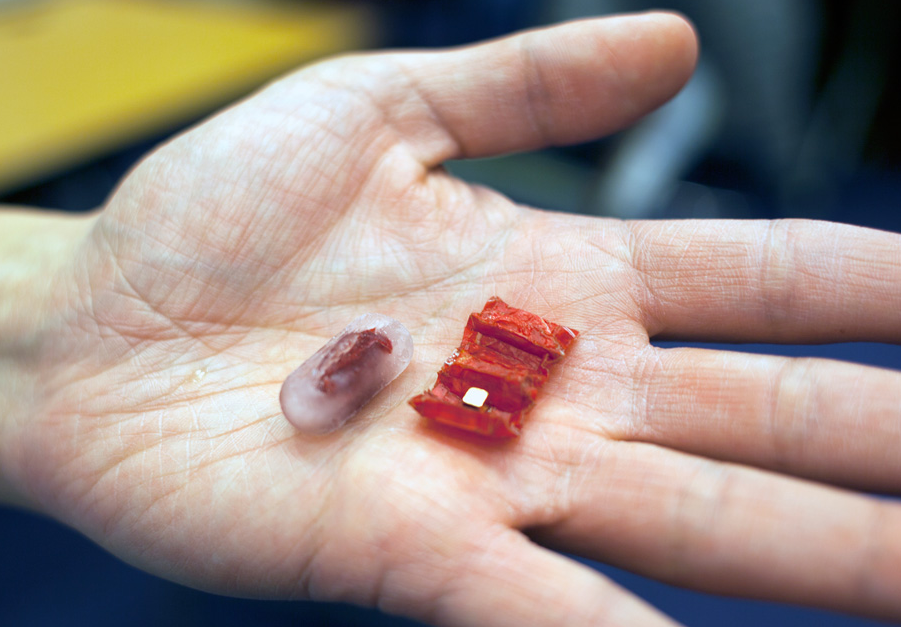 It's a little known but often dangerous problem: each year, 3,500 people in the U.S. -- mostly young children -- swallow button batteries. Normally, these batteries pass through the body without incident. But if they come into prolonged contact with esophagus or stomach tissue, the results can be harmful: the batteries can cause an electric current that produces hydroxide, which burns through body tissue.

A postdoctoral student at the Massachusetts Institute of Technology, Shuhei Miyashita brought up this hazard to Daniela Rus, the professor who leads the Computer Science and Artificial Intelligence Laboratory. A simple experiment proved how hazardous the little batteries can be.

"Shuhei bought a piece of ham, and he put the battery on the ham," Rus explained on MIT's website. "Within half an hour, the battery was fully submerged in the ham. So that made me realize that, yes, this is important. If you have a battery in your body, you really want it out as soon as possible."

Together with their colleagues, Miyashita and Rus developed an innovative solution: a tiny, origami robot that can be swallowed in the form of a capsule. Inside the body, the robot opens itself up and is steered by external magnetic fields. It then crawls across the walls of the stomach and can grasp and remove the swallowed battery. It could also be used to patch up internal wounds, the researchers say.

The research team -- which spans MIT, the University of Sheffield and the Tokyo Institute of Technology -- demonstrates how the miniature robot works in the video below:

"This concept is both highly creative and highly practical, and it addresses a clinical need in an elegant way," Bradley Nelson, a robotics professor at the Swiss Federal Institute of Technology Zurich, told MIT. "It is one of the most convincing applications of origami robots that I have seen."

To create the robot, the researchers struggled to find materials that were not only suited for the task at hand but would not be rejected by the human body's immune system. Specifically, in their search for a strong, structural material, they tested about a dozen options before arriving at a surprising solution: a type of dried pig intestine that's used in sausage casings.

"We spent a lot of time at Asian markets and the Chinatown market looking for materials," team member Shuguang Li said.

The new origami robot builds on past iterations, but makes significant advancements. Rus told MIT she's excited by the robot's many potential applications in medicine.

"For applications inside the body, we need a small, controllable, untethered robot system. It's really difficult to control and place a robot inside the body if the robot is attached to a tether," she said.

The team presents the robot this week at the International Conference on Robotics and Automation.