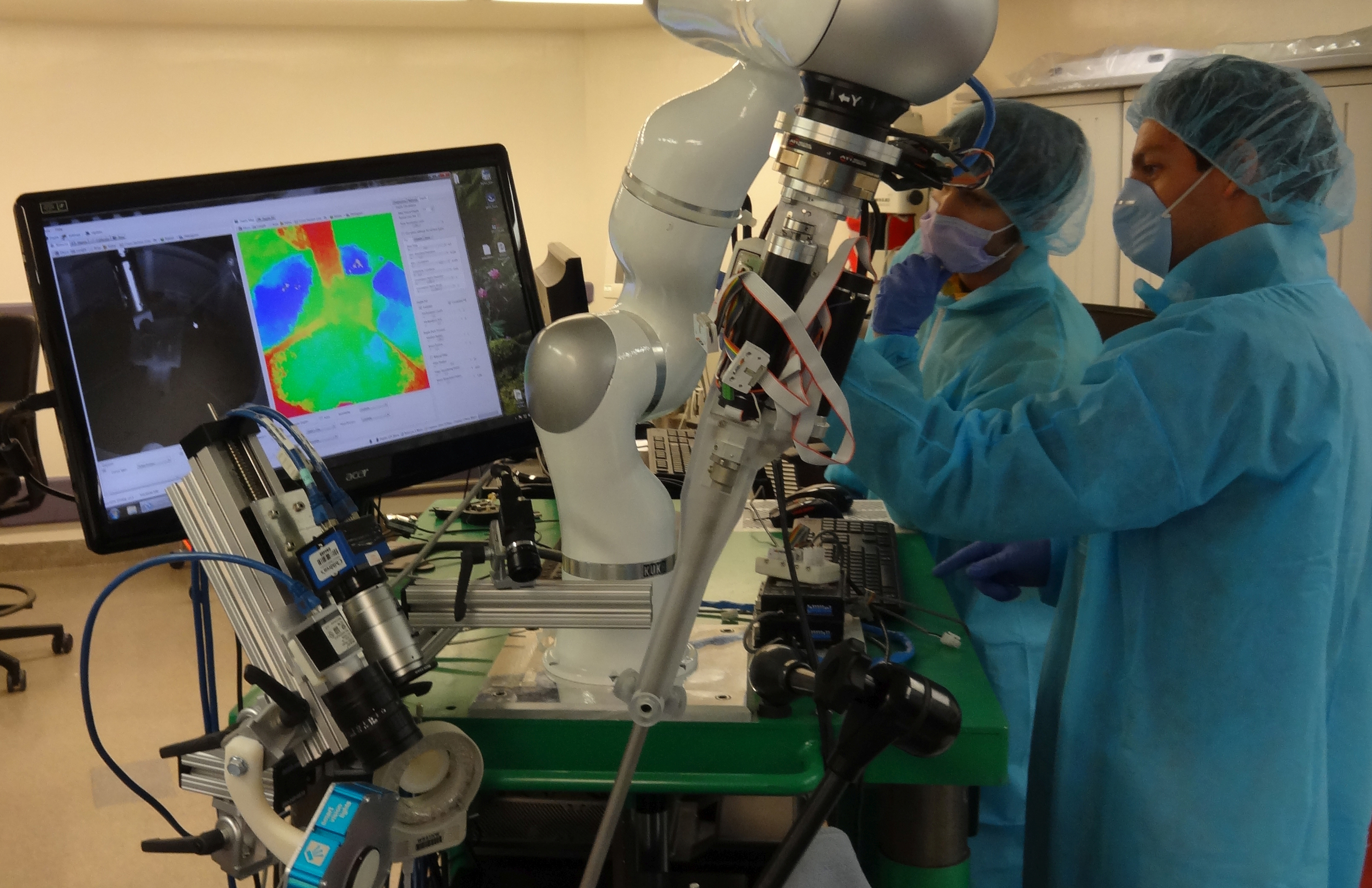 Getting stitched up by Dr. Robot may one day be reality: Scientists have created a robotic system that did just that in living animals without a real doctor pulling the strings.

Much like engineers are designing self-driving cars, Wednesday's research is part of a move toward autonomous surgical robots, removing the surgeon's hands from certain tasks that a machine might perform all by itself.

No, doctors wouldn't leave the bedside -- they're supposed to supervise, plus they'd handle the rest of the surgery. Nor is the device ready for operating rooms.

But in small tests using pigs, the robotic arm performed at least as well, and in some cases a bit better, as some competing surgeons in stitching together intestinal tissue, researchers reported in the journal Science Translational Medicine.

"The purpose wasn't to replace surgeons," said Dr. Peter C.W. Kim of Children's National Health System in Washington, a pediatric surgeon who led the project. "If you have an intelligent tool that works with a surgeon, can it improve the outcome? That's what we have done."

If you've heard about machines like the popular Da Vinci system, you might think robots already are operating. Not really. Today many hospitals offer robot-assisted surgery where surgeons use the machinery as tools that they manually control, typically to operate through tiny openings in the body. But robot-assisted surgery has been controversial, as some studies have shown it can bring higher costs without better outcomes.

So why the push for next-generation autonomous robots? Proponents think there are cases where a machine's precision may outperform a human hand.

Wednesday's project is "the first baby step toward true autonomy," said Dr. Umamaheswar Duvvuri of the University of Pittsburgh Medical Center, a head and neck surgeon and robotic specialist who wasn't involved with new work.

But don't expect to see doctors ever leave entire operations in a robot's digits, he cautioned.

Because it's designed to do one specific task -- stitch up tissue -- the machine is a lot like the automation trend in other industries. Robot arms do the welding and painting in most U.S. car assembly lines, for example. They can find inventory in warehouses. From the driver's perspective, many cars now are able to warn drivers when they're too close to the car in front, or take control and apply the brakes to prevent a crash.

The new STAR system -- it stands for Smart Tissue Autonomous Robot -- works sort of like a programmable sewing machine.

Kim's team at Children's Sheikh Zayed Institute for Pediatric Surgical Innovation took a standard robotic arm and equipped it with suturing equipment plus smart imaging technologies to let it track moving tissue in 3-D and with an equivalent of night vision. They added sensors to help guide each stitch and tell how tightly to pull.

The surgeon places fluorescent markers on the tissue that needs stitching, and the robot takes aim as doctors keep watch.

Now the test: Could the STAR reconnect tubular pieces of intestinal tissue from pigs, sort of like two ends of a garden hose? Any soft-tissue surgeries are tricky for machinery because those tissues move out of place so easily. And the stitches in these connections must be placed precisely to avoid leaks or blockages, a challenge even for experts.

Using pieces of pig bowel outside of the animals' bodies as well as in five living but sedated pigs, the researchers tested the STAR robot against open surgery, minimally invasive surgery and robot-assisted surgery.

By some measures -- the consistency of stitches and their strength to avoid leaks -- "we surpassed the surgeons," said Children's engineer Ryan Decker.

The STAR approach wasn't perfect. The STAR had to reposition fewer stitches than the surgeons performing minimally invasive or robot-assisted suturing. But in the living animals, the robot took much longer and made a few suturing mistakes while the surgeon sewing by hand made none.

Kim, whose team has filed patents on the system, said the robot can be sped up. He hopes to begin human studies in two or three years.