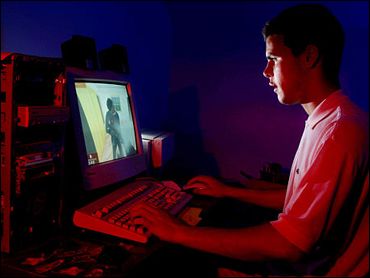 Millions of people in this country don't automatically reach for the television remote control when they want to be entertained. They turn to electronic games for diversion.

According to a new AP-AOL Games poll, 40 percent of American adults play games on a computer or a console. Men, younger adults and minorities were most likely to play those games.

Among those who describe themselves as gamers, 45 percent play over the Internet. And more than a third of online gamers spent more than $200 last year on gaming, compared with about a quarter of those who don't play games online.

The survey results come as Sony Corp., Nintendo Co. and Microsoft Corp. prepare to push their new products this week at the Electronic Entertainment Expo in Los Angeles.

Casual games like board or card games were the most popular, followed by strategy games, action sports, adventure, first-person shooters and simulations, the poll found. Casual, strategy and role-playing games were most popular among online gamers.

And that game playing can be expensive, though online gamers are more likely to have spent more than $500 last year compared with gamers who don't play online.

Of those who play online games, nearly one in five said they had formed ongoing friendships or relationships with fellow gamers they did not know before, the poll found.

The AP-AOL Games poll of 3,024 U.S. adults, including 1,046 gamers, was conducted by Ipsos, an international polling firm, on April 18-20 and 24-27. For the gamers, the poll has a margin of sampling error of plus or minus 3 percentage points.