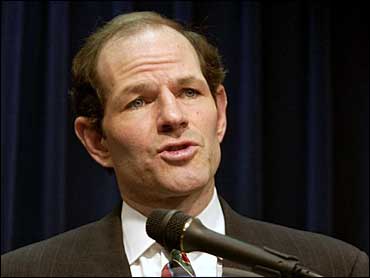 This story from The New Republic was written by Martin Peretz.

The great mentioner -- in this case, National Journal's Hotline -- has put together a list of some 70-odd people who have been recommended (by whom, no one knows) to be John Kerry's running mate. Some of them, presumably, have been leaked by the Kerry campaign itself in an effort to appease or appeal to various constituencies: Representative John Lewis of Georgia, for instance, or former Department of Health and Human Services Secretary Donna Shalala, or House Minority Leader Nancy Pelosi. Five Republicans make the list: John McCain, of course, along with former Senator Warren Rudman, Senator Chuck Hagel, ex-Environmental Protection Agency Administrator Christie Whitman, and Secretary of State Colin Powell. There are several zillionaires (which is exactly what the ticket does not need), including Jay Rockefeller and Jane Harman; and, of course, the two patriarch paladins of the party's squishy foreign policy wing: 9/11 Commission Vice Chairman and ex-Representative Lee Hamilton, and former Senator George Mitchell, now chairman of Disney and the author of one of the many failed plans for peace between Israel and the Palestinians. The author of the last such plan, embittered retired General Anthony Zinni, is also on this inventory. (Another creator of another Middle East peace plan -- the recently resigned CIA director, George Tenet -- is on no one's list for anything.)

None of these, it's safe to assume, is a serious option for Kerry. I don't know who is. But the likely candidates aren't an impressive bunch. Retired General Wesley Clark is a touch goofy, as his performance in the primary attests. And, if Clark's dalliances with Michael Moore-style extremism were too stirring, Senator Bob Graham's candidacy wasn't stirring enough. Indeed, he seems congenitally incapable of rousing excitement in anyone, and aloof dullness is hardly what the Kerry campaign needs more of. Before he became governor of New Mexico, Bill Richardson spent part of a day in 1997 in Washington to interview Monica Lewinsky about a job at the U.S. mission at the United Nations. Why would anyone want to open up that can of worms again (except, of course, the Bush campaign)? Governor Tom Vilsack of Iowa would be seen as political payback for the senator's victory in the caucuses. I can hear the slogan: "Vilsack, payback." Richard Gephardt speaks to the Democratic core, but the Democratic core does not win general elections. (It didn't even place him in the top three in Iowa.) I have nothing to say about Evan Bayh, either for or against, and, I suspect, neither does almost anyone else. I respect John Edwards and supported him financially in the late primaries. He'd certainly satisfy me. But Kerry won't refract well off his graces, and so I suspect he simply won't go there.

My choice would be Eliot Spitzer, the attorney general of New York, the subject of one recent TNR article ("Consumer Party," December 2, 2002) and the co-author of another ("Bull Run," March 22). Call me hyperbolic, but Spitzer reminds me of Theodore Roosevelt -- not the TR of bluster, but the TR of remedy and of vision. "Our basic problem in the twentieth century," Roosevelt argued, "is to see that the marvelously augmented powers of production bequeathed to us by the nineteenth century be made to administer to the needs of the many rather than be exploited for the profit of the few." Roosevelt was a trustbuster, and, through trust-busting, he aimed to mute the natural avarice of capitalism. The great domestic American achievement of the last 40 years is that the basis of our society -- our prosperity -- has rested on the most democratic capitalism in the world. Ownership of the means of production, to use a Marxist term, is more widely diffused in the United States than anywhere else. But that diffusion is now under threat. The foundations of the public equity markets are mutual funds, pension funds, and small investors; yet these foundations are now eroding. Spitzer has set himself the task of restoring the trust that has been palpably betrayed by several mutual-fund conglomerates, by many of our biggest investment banks, by scores of megacorporations, and by the big accounting firms. And do not think for a moment that the huge and fancy law firms were absent from this rush after illicit mammon. The scandals have become endemic. It was as if, in the country's best hospitals, suddenly the doctors had furtively recanted the Hippocratic oath.

Spitzer has waged his effort meticulously. He does not want the market to crumble, and he is not engaging in class warfare. It baffles me that most other Democrats have shied away from these issues except in occasional inflammatory and irrelevant rhetoric. Maybe the Democrats are as dependent for the financing of their campaigns on Wall Street bankers as are the Republicans. This is not a partisan issue, and the disgrace stains both parties. But, if anybody has labored to protect the invested savings of the citizenry, it is Spitzer who could give the Democrats a much-needed issue advantage. There is no exotic calculus about it: Spitzer is a popular hero because he is the one politician to have done something concrete for all the people. He has led the corps of state attorneys general in specific and winnable legal battles against corporate criminality.

Spitzer's mind cuts sharp and runs deep. His liberalism is of the muscular sort. I suspect he does not believe that the Patriot Act is the greatest danger to American life since September 11. He would assure undecided voters precisely on the issues that give them discomfort with Kerry's own undecidedness, which is almost psychological, rather than merely political. With Spitzer, you really know where you and he stand. Yes, he lacks foreign policy experience. But that is Kerry's chief credential, for better or for worse, and he doesn't need to have it augmented. And, yes, he would break the old rule against nominating running mates from adjoining states. But Bill Clinton and Al Gore broke that taboo twelve years ago. New York may not be a swing state, but it is telling that, in that harshest of environments, Spitzer may now be the most popular politician there. I suspect he'd be pretty popular in Ohio and Missouri and Florida as well.

Martin Peretz is editor-in-chief at The New Republic.