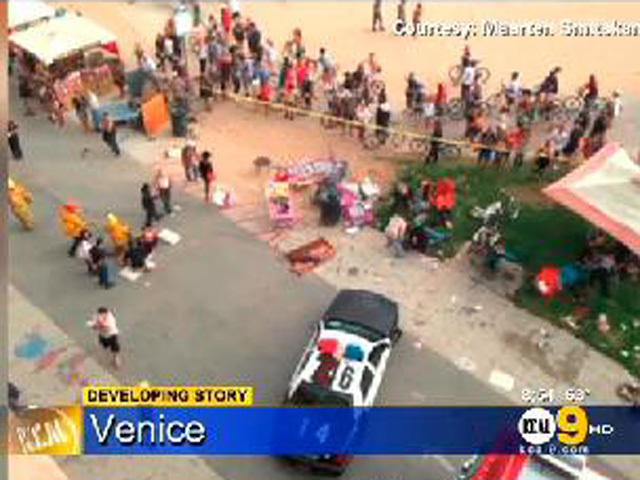 (AP) LOS ANGELES - A man was in jail on suspicion of murder after a driver plowed into crowds at a popular Los Angeles boardwalk Saturday, a seemingly intentional hit-and-run that killed an Italian woman on her honeymoon and injured 11 others.

Nathan Louis Campbell, 38, was arrested after he walked into a police station in neighboring Santa Monica about two hours after the incident and told police that he was involved.

Campbell was in jail on $1 million bail.

Deputy Chief Kirk Albanese declined to discuss a motive but said there was no indication that the attack was a terrorist act or that anyone else was involved.

Security video taken at Venice Beach boardwalk showed a man parking a black car, stepping out and surveying the leisurely scene for several minutes before getting back into the vehicle and speeding into the crowd. Hundreds of people who had been walking or sitting at cafes raced to get out of the way before the vehicle sped out of sight.

The Italian woman was identified as Alice Gruppioni, 32. Her family in Bologna told the Italian news agency LaPresse that she had been on her honeymoon after a July 20 wedding.

Authorities said another person was critically injured. Two others were in serious condition, and eight suffered less serious injuries.

People were "stumbling around, blood dripping down their legs, looking confused not knowing what had happened, people screaming," said Louisa Hodge, who described "blocks and blocks of people just strewn across the sidewalk."

Witnesses said the car was traveling at about 35 to 40 mph along the boardwalk.

The boardwalk is home to galleries, restaurants, tattoo shops, skateboard parks and the famous outdoor weight room known as Muscle Beach. It can draw as many as 150,000 people on summer weekends.