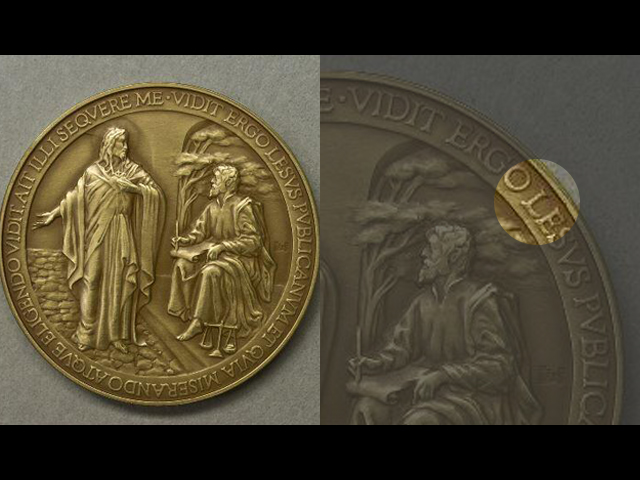 The Holy See has recalled thousands of commemorative papal medals after the word "Jesus" was misspelled as "Lesus."

According to the Vatican Information Service, more than 6,000 of the medals were produced by the Italian State Mint to commemorate the beginning of Francis' papacy.

The medal features a portrait of Francis on one side and on the other, a Latin phrase that the future pontiff says inspired him as a teenager to pursue the priesthood: "Vidit ergo Jesus publicanum et quia miserando antque eligendo vidit, ait illi sequere me." (Translation: "Jesus, therefore, saw the publican, and because he saw by having mercy and by choosing, He said to him, 'Follow me'").

The Telegraph reports that the medals - 200 in gold, 3,000 in silver and 3,000 in bronze - were withdrawn after being put on sale at the Vatican Publishing House in St Peter's Square.

The Catholic News Service reported via Twitter that four of the medals had already been sold and will become valuable collector's items.

After the medal mishap was made public, one observer noted on Twitter: "I blame the Lesuits."