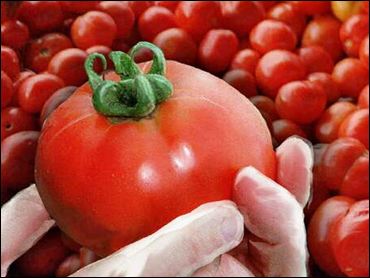 The Vatican stepped into the charged debate over genetically modified organisms Monday, convening a scientific conference to help it make a pronouncement on the moral issues involved and whether biotech foods can really alleviate world hunger.

The conference organizer, Cardinal Renato Martino, head of the Pontifical Council for Justice and Peace, has spoken out frequently about the potential benefits of the technology, and some participants said his lineup of speakers was skewed toward the pro-biotech camp.

The Vatican plans to use the data it gathers from the seminar to issue a pronouncement on GMOs, although no date has been given.

Any Vatican endorsement would have a profound impact on the debate, because of the ethical issues involved and because the jury is still out on whether biotech foods really can ease world hunger, said Dr. Margaret Mellon, a speaker at the symposium and a director of the Washington-based Union of Concerned Scientists.

She told a press conference that her main concern is that the benefits of biotechnology for easing world hunger are being "really oversold" and that whatever benefits there are may not outweigh the risks.

Martino opened the two-day conference "GMO: Threat or Hope" by acknowledging the charged nature of the debate, and the implications of genetically engineered products on the future of the world.

"We are fully aware that the stakes are high and delicate," he said, citing the divide in public opinion, the commercial interests and ethical questions involved, as well as "the difficulty in defining scientifically a material that is subject to evolving research."

But he said the Vatican's aim was to find some common ground for the benefit of mankind, and particularly the poor. The issue of poverty and hunger is a major concern for the Vatican, which rejects arguments that limiting family size by using contraception is one way to improve food security in the developing world.

Martino has suggested in newspaper interviews that the Vatican might consider endorsing biotech crops as a way to help alleviate hunger, arguing that the controversy was more political than scientific. He has said he suffered no ill effects from the GM foods he ate while living in New York as the Vatican's envoy to the United Nations for 16 years.

Mellon said such arguments in favor of GMOs are not based in sound science, since Americans only eat GM corn and soy, usually in processed forms, not genetically engineered whole foods like tomatoes or melons.

"You certainly know people are not dropping in large numbers as a result of consuming genetically engineered foods, but it is not the basis for a wholesale conclusion of safety," she told a press conference.

Dr. Nam-Hai Chua, head of Rockefeller University's plant molecular biology laboratory, countered that not only weren't large numbers of people dying, but that no one had died as a result of eating GMOs.

"As a scientist, my conclusion would be that our present regulatory procedures are adequate to protect the safety of this kind of product," he said.

He stressed that all products have to be examined on a case-by-case basis. "But it doesn't mean that there is something intrinsically bad or evil about the technology. It's how we use it, and we have to use it with the proper regulatory procedures in place."

Any Vatican endorsement of biotech crops would likely ruffle feathers in Europe, which has imposed a moratorium on growing or importing GMOs because of fears about environmental and heath effects of bioengineering, and in African countries such as Zambia, which has rejected biotech food aid.

But it would likely draw praise from the United States, where biotech companies have been at the forefront of extolling the virtues of GMOs, which can be made to resist insects or disease.

The environmentalist group Greenpeace said the Vatican altered its lineup of speakers for the conference at the last minute because it had so few critics of GM technology and came under pressure to give a more balanced view.

A Greenpeace scientist was due to address the conference on Tuesday, and a Zambian priest who is critical of the technology was also added in late, said Greenpeace science adviser Dr. Doreen Stabinsky.

Another anti-GMO group, the Third World Network, refused to participate because the Vatican wouldn't allow one of its scientists to speak, limiting the invitation to its director, who is not a scientist, Stabinsky said.