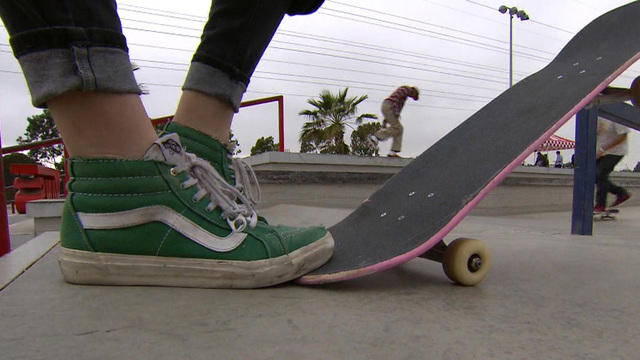 When 1982’s “Fast Times at Ridgemont High” made Sean Penn a star, the actor from Santa Monica carried a local sneaker company along with him. That movie vaulted Vans from a California brand to a company with a national footprint.

This year, Vans has been celebrating its 50th anniversary. Over the past five decades, the company has evolved from a modest deck shoemaker to become a signifier of street culture, art and fashion, reports CBS News correspondent Vladimir Duthiers.

Each day, skateboarders gather to do ollies, railslides and other tricks at the Huntington Beach State Park built by the sneaker company. It’s skaters like those who put the sneakers on the map.

“If you grow up in that world, then you know what Vans is and it’s been a part of my life since from a very, very young age,” said CEO Doug Palladini.

This year, Palladini released a 50th anniversary edition of the book “Vans: Off the Wall.”

“How fast did they catch on?” Duthiers asked.

“The first shoe, the Authentic -- for people who know it -- it’s basically a traditional deck shoe. And there’s a lot of brands that make a similar shoe,” Palladini said. “It wasn’t really until we were found by skateboarders in the early ‘70s that we found our true calling.”

It started in 1966 as the Van Doren Rubber Company. Paul Van Doren and his brother, Jim -- shoemakers from Massachusetts -- had just set up shop in Anaheim.

“Is it a legend or is it a true story that the first customers that came to Vans chose their shoe and then they were made that very day, and they came back to pick them up later on?” Duthiers asked.

“Yeah, true stories,” Palladini said. “He had a little store on the front and people would come in and they would look at the pink shoe in the box and say, ‘Well, I like this pink but I wish it was a little darker.’ And he said, ‘OK, you show me what color you want and I will make you that shoe.’”

As told in the 2002 documentary “Dogtown and Z-Boys,” some of those people ended up being skateboarding pioneers from the West Los Angeles area known as Dogtown. The shoes allowed them to feel the board while the volcanized rubber and waffle pattern soles helped them stay on board.

“The Era we were talking about was the first shoe that was ever made for the act of skateboarding specifically,” Palladini said. “So they took the Authentic that they had been wearing, and they said, ‘Hey, can you just reinforce some different parts with the fabric? Can you put some just a little bit of padding in the heel here for us?’ And then they were off and running.”

But even with the notoriety of “Fast Times at Ridgemont High,” the company fell on hard times and was forced to file for bankruptcy in 1984. In the aftermath, the company put its best foot forward, focusing on its five main silhouettes and its core brand.

“So the clarity of who Vans is -- what is that?” Duthiers asked.

“Vans is really the global icon of creative expression in youth culture. Our whole thing is about individuals who want to express themselves creatively. We have what we call our four cultural pillars of art, music, action sports and street culture,” Palladini said. “And at the center of all of those subcultures is creative expression.”

This summer, the band Dinosaur Jr. shot its new video “Goin Down” at House of Vans in Brooklyn. It’s one of a number of locations around the world that celebrates street culture.

“When I was a kid, I mean even the shoes I have on, you would special order them,” said the video’s director, Atiba Jefferson. “And that’s the greatest things about Vans -- it was, you could special order any color.”

Jefferson, who started skating in 1989, said the company sticks to its roots even when its kicks aren’t in style.

“It’s very fashion-forward now. It’s crazy, I mean, the Sk8-Hi I see on tons of models, you know, and I’ve seen tons of NBA basketball players in the classics,” Jefferson said. “So, you know, it’s a classic, timeless shoe.”

After 50 years, Vans has grown up and more often are worn by people getting dressed up.

“You may go back and refresh your Sk8-His where the hole in them just got too big and your significant other said you can’t wear those anymore. Or you may have gotten a job and you need the all-black-to-the-floor ones, or you want something more dressy for your prom and you get the leather ones,” Palladini said. “That’s all good to us.”

Or you can wear the checkered slip-ons to a state dinner at the White House.

“We just had Frank Ocean wear these. He went to dinner, he took his mom to dinner with President Obama, and he wore these with his suit. And that was just so cool,” Palladini said.

In a crowded sneaker market worth $17.2 billion, it helps to stand out in a crowd.

“How do you expect to grow the company over the next three, five years?” Duthiers asked.

But the company that once sold sneakers in front of its Southern California factory now makes its shoes overseas.

“Some of what’s happening in manufacturing today -- and you see this with other brands as well -- is coming back to our shore and we’re hopeful that we’ll be able to take part in that, so more on that coming soon,” Palladini said.

It’s an economic issue the incoming president is already focusing on.

“What would it take to bring the manufacturing back?” Duthiers asked.

“Well, we live off our product being accessible to everybody, right? The average price of a pair of Vans is probably still in the $60 range today,” Palladini said.

“So if you had to make them here, you would be paying $120 for a pair of shoes,” Duthiers said.

“And again, that’s not acceptable to us. You know, we need to figure out how to do both,” Palladini said.

That’s because Palladini wants people in his sneakers for the next 50 years.

“It’s the things that you really remember in life -- you had your first kiss in this pair, the best concert you ever went to, the first trick you landed on your skateboard -- those are the things that you harken back every time you put your Vans on. And that’s a beautiful thing,” Palladini said.