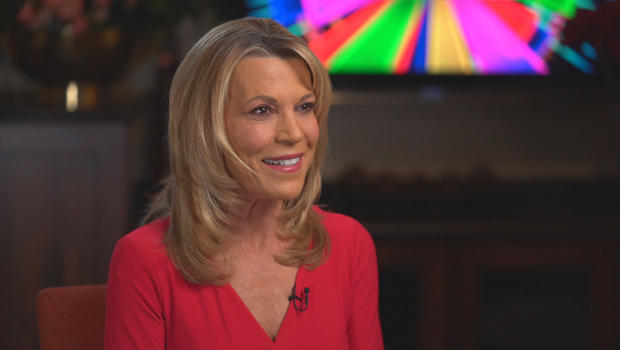 This story was originally broadcast on March 1, 2020.

With so little to be sure of in this topsy-turvy world, at least one thing is certain: Each weeknight, Vanna White will glide across the stage of "Wheel of Fortune," revealing letters, applauding contestants, and looking beautiful while doing it.

"And that's my job," said "Wheel of Fortune" star Vanna White. "I'll be the first to make fun of it, shall we say. It is what I do. And I feel very lucky that I was able to get this job. I love what I do."

And fans of the show love what she does. White has been co-hosting "Wheel of Fortune" with Pat Sajak for 37 years. Back in the Dark Ages (before 1997), White had to turn the letters.

"No. You know, I said: Is there any way you can make my job easier?' White laughed. "I didn't really say that! But it took time, because they had to manually stop tape and change those letters [for each puzzle], which was couple of hours, at least, to do. So, when they turned it into a computerized puzzle board, it went like that [snap]. So, it saved hours."

It's not so easy to define White's appeal, but it's impossible to imagine "Wheel" without her.

Some of the show's 10 to 11 million viewers tune in to see what she will wear.

"How many different dresses?"

Vanna White was born 63 years ago in North Myrtle Beach, South Carolina. "It was wonderful. Back then, we didn't have to lock our doors. We left the keys in the car. It was a population of about 5,000 people."

"And I read somewhere that you used to shoot marbles?"

"I have to tell you. I'm not sure how you play marbles."

She was ten years old when she decided she wanted a career in television. She did watch game shows: "As a matter of fact, 'Concentration' was one of my game shows that I loved to watch. I even went to New York when I was 12 years old and went to the set of 'Concentration.'"

After high school, she enrolled in the Atlanta School of Fashion and Design, where she studied fashion merchandising and poise.

What was the job? "Waitressing."

Host Pat Sajak admits he didn't recommend White at the time: "And Vanna knows this. Not that she wasn't lovely and wonderful and personable and all that, but she was the most nervous, by far, of any of them."

But the show's creator, Merv Griffin, who also brought "Jeopardy!" to television, knew what the public wanted.

Rocca asked, "At what point did you realize: 'Oh, boy, I'm a household name. I'm a first-name-only person, Vanna,' like, that big?"

"That was when I was in the grocery line checking out, and I was on the cover of Newsweek," she said. "I thought: Wow, I guess I've made it."

But four years into the job she suffered a terrible blow.

White was dating actor and former Chippendale's dancer John Gibson. The two were engaged. "My boyfriend at the time was killed in a plane crash; that was devastating," said White.

"But all my fans were so supportive. I received tons of fan mail, like letters: 'I've been through this.' And it just made me feel like I wasn't the only one."

She calls the show a family, a cliche, to be sure, in television, but White seems genuinely to feel the pain of "Wheel" contestants when they stumble. "Of course I am. I feel so sad for them when that happens!"

And that may be the key to Vanna White's enduring appeal: She and the audience have a genuine connection.

She offered some of the things people say to her: "'I've watched you my whole life.' Or, 'My grandmother and I watched you.' And 'You taught me the alphabet.' 'You taught me how to speak English.' So, we change people's lives."

During most of the show's run, White has actually said very little on camera. But that changed this past December when Sajak was hospitalized for emergency surgery for a blocked intestine.

White filled in for Sajak for three weeks. "The fact that she did it speak volumes about her," he said. "It would have been very easy for her to say, 'I'm sorry, this is not what I do.' But the audience was rooting for her and almost proud to see her up there."

Rocca asked her, "Would you ever wanna do it again?"

"Uhm, it's not at the top of my list," she replied. "I loved being there, I loved doing it. But I was so nervous. Maybe if I did it a few more times, I would feel better about it. But I'm my worst critic."

White tapes "Wheel of Fortune" four days a month. When she is not at the studio, she spends time with her son, Nico, and her daughter, Gigi, and with her boyfriend, real estate developer John Donaldson.

White's contract has her at "Wheel of Fortune"'s puzzleboard until 2022, but we're pretty sure her fans will never let her leave.

Rocca asked, "Are you ever worried that a robot's gonna take your job?"