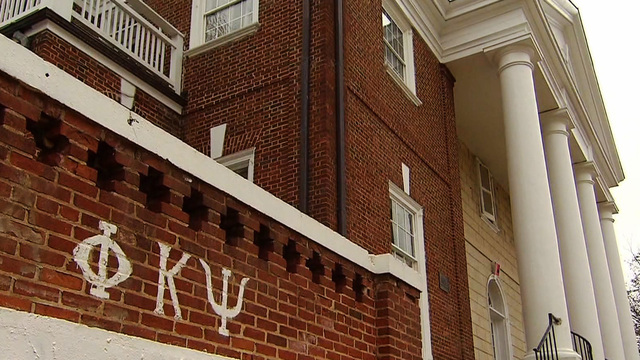 RICHMOND, Va. - The fraternity at the center of a now-discredited Rolling Stone rape article says the story was defamatory and reckless and they are pursuing legal action against the magazine.

Phi Kappa Psi said Monday in a statement that the article was viewed by millions, led to members being ostracized and there was vandalism of the fraternity house.

"Clearly our fraternity and its members have been defamed, but more importantly we fear this entire episode may prompt some victims to remain in the shadows, fearful to confront their attackers," Stephen Scipione, the president of the fraternity chapter in Charlottesville, Virginia, said in a statement.

The article said a woman named "Jackie" was gang-raped at the fraternity house. Police have said there is no evidence the attack took place.

Despite the scathing Columbia report, Rolling Stone has since said that no changes in the magazine's reporting and editing process will take place, and no one involved in the debacle will be fired.

The journalism school's analysis was accompanied by a statement from Rolling Stone Managing Editor Will Dana apologizing for the failures and retracting the November 2014 story.

Some University of Virginia students said none of that will erase the article's repercussions.

Phi Kappa Psi, in its statement announcing its intent to pursue legal action against Rolling Stone, singled out the lack of action by the magazine after the scathing Columbia report as part of its motivation to sue.

"The reporter in question not only failed to apologize to members of Phi Kappa Psi, but doesn't even acknowledge the three witnesses she quoted in the article but never interviewed. This is a clear and sad indication that the magazine is not serious about its journalistic obligations leaving the door open for equally irresponsible reporting in the future," the statement read.

The story's author, Sabrina Rubin Erdely, issued a statement of apology Sunday, saying "I did not go far enough to verify her story. I allowed my concern for Jackie's well-being, my fear of re-traumatizing her, and my confidence in her credibility to take the place of more questioning and more facts."

Teresa A. Sullivan, the president of the University of Virginia, slammed Rolling Stone's editors and Erderly in a statement also on Sunday, saying the story "did nothing to combat sexual violence, and it damaged serious efforts to address the issue."

Columbia Journalism School Dean Steve Coll says the magazine's expose of what it called a culture of sex assaults at the University of Virginia was rife with bad journalistic practice. Coll said Monday during a news conference in New York that "Jackie" is not to blame for the magazine's failures.

After the story was first published, the account of the victim, "Jackie," a pseudonym, came under intense scrutiny, most notably in a lengthy report by The Washington Post. Initially, Rolling Stone magazine was defensive of their reporting, but relented and published an initial apology that read: "In the face of new information, there now appear to be discrepancies in Jackie's account, and we have come to the conclusion that our trust in her was misplaced."

Rolling Stone also said that because Jackie's story was sensitive, the magazine honored her request not to contact the men who she claimed organized and participated in the attack.

Critics slammed the initial apology as victim blaming, and said it was on the magazine to scrutinize Jackie's story and report it from all sides.

A short time after their initial apology, what appeared to be a revised version of the apology was put up on Rolling Stone's website, reading: "In the face of new information reported by the Washington Post and other news outlets, there now appear to be discrepancies in Jackie's account."

Phi Kappa Psi, where the gang rape allegedly occurred on Sept. 28, 2012, was attacked after the article was published, with cinderblocks thrown through the fraternity house's windows.

The fraternity issued its own initial statement disputing the account of Jackie, who described being led upstairs by her date, who then allegedly orchestrated her gang-rape by seven men as he and another watched. Among the many things they pointed to was the lack of record of there even having been a party at the fraternity house on the day in question.

"We continue to be shocked by the allegations and saddened by this story," the statement said. "We have no knowledge of these alleged acts being committed at our house or by our members. Anyone who commits any form of sexual assault, wherever or whenever, should be identified and brought to justice."