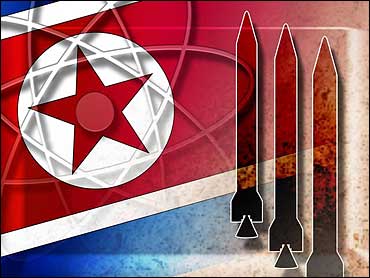 In an op-ed piece published Thursday in the Washington Post, Perry said the Bush administration should strike and destroy the missile before it can be launched.

Perry noted the Bush administration's doctrine of pre-emption, which it used as the basis for sending U.S. troops into Iraq in 2003.

"Therefore, if North Korea persists in its launch preparations, the United States should immediately make clear its intention to strike and destroy the North Korean Taepodong missile before it can be launched," Perry said in the piece, co-written with Ashton B. Carter, Perry's assistant at the Pentagon.

They asserted that a failure to act would only create more serious problems.

"A successful Taepodong launch, unopposed by the United States, its intended victim, would only embolden North Korea even further. The result would be more nuclear warheads atop more and more missiles," they wrote.

"We think diplomacy is the right answer and that is what we are pursuing," Hadley said. "The way out of this is for North Korea to decide not to test this missile."

On a related matter, Hadley said a U.S. missile-defense system now under development had what he called a "limited operational capability" to protect against weapons such as the long-range North Korean missile.

"We're watching it very carefully and preparations are very far along," Hadley said when asked about South Korea's assessment that a launch was not imminent.

"So you could, from a capability standpoint, have a launch," Hadley said. "Now what they intend to do — which is what a lot of people are trying to read — of course we don't know. What we hope they will do is give it up and not launch."

Hadley briefed reporters while traveling with President Bush in Europe.