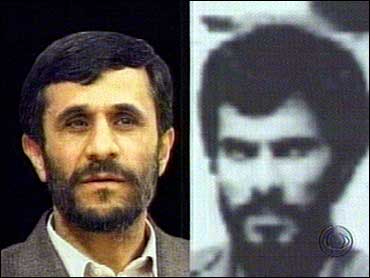 The White House said Thursday that Iran's incoming president was a leader of the student movement that orchestrated the capture of the U.S. Embassy in 1979, but the United States still hasn't determined whether he took hostages as alleged by some of those who were held.

Six former hostages have identified Iran's ultraconservative president-elect, Mahmoud Ahmadinejad, as one of their captors during the 444 days they were held.

Bush said on June 30 that their allegation "raises many questions." The U.S. government has been investigating since then.

"I don't think it should surprise anyone given the nature of the regime in Iran that he might have been involved in these kind of activities," said White House press secretary Scott McClellan.

But he said no determination has been made.

"We know he was a leader of the student movement that organized the attack on the embassy and the taking of the American hostages," McClellan said. "However, we are still looking into whether or not he was actually one of the hostage-takers. That is something we continue to look in to."

Militant students seized the U.S. Embassy in Tehran on Nov. 4, 1979, and held the U.S. hostages in reprisal for Washington's refusal to surrender ousted Shah Mohammed Reza Pahlavi for trial. The shah had fled Iran earlier that year after he was overthrown by the Islamic Revolution.

Before winning Iran's presidential election last month - which Mr. Bush dismissed as antidemocratic - Ahmadinejad had been the ultraconservative mayor of Tehran and, his associates said, a member of the student group that planned the embassy takeover. But his associates said he opposed the plan and did not take part in holding hostages because he preferred instead to target the Soviet Embassy.

Six former hostages told The Associated Press they recognized Ahmadinejad from television coverage and photos after his election.

Ahmadinejad resembles a thin, bearded man pictured on Nov. 9, 1979, holding the arm of a blindfolded hostage and displaying him to the crowd outside the embassy, although some who know Ahmadinejad say the man is too tall to be the incoming president.