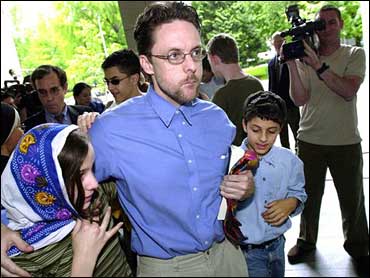 A lawyer the FBI wrongly arrested after the 2004 Madrid terrorist bombings because of a misidentified fingerprint has settled part of his lawsuit against the U.S. government for $2 million.

Brandon Mayfield, who said he was detained for two weeks in 2004, maintained that he was arrested because of his Muslim faith.

"Not only does my detention as a material witness in the Madrid bombing underscore the fallacy that fingerprint identification is reliable, I hope the public will remember that the U.S. government also targeted me and my family because of our Muslim religion," he said in a news release Wednesday.

But Mayfield got something the government rarely gives anyone under investigation: a formal apology from the United States of America, reports CBS News Justice Department producer Stephanie Lambidakis. The apology, a separate two-paragraph statement attached to the agreement, also expresses regret that the government "mistakenly linked Mr. Mayfield" to the 2004 Madrid train bombings.

Not mentioned in the settlement or the Justice Department statement is the full picture of what FBI agents sought and found during their clandestine search of Mayfield's house: computer drives and documents that were copied, DNA samples taken and preserved on cotton swabs, six cigarette butts, and 355 digital photographs, Lambidakis reports.

Mayfield's lawsuit against the government got a big boost in January when a Justice Department's internal watchdog, the Inspector General, released a blistering report on how FBI examiners "misindentified" Mayfield's fingerprint, Lambidakis says. The findings cited confusion among the FBI fingerprint examiners and described the mistake as a "watershed event for the FBI lab, which has described latent fingerpint identification as the 'gold standard for forensic science.'"

Department spokeswoman Tasia Scolinos said the FBI has since adopted suggestions for improving its fingerprint identification process "to ensure that what happened to Mr. Mayfield does not happen again."

But the local FBI office said Wednesday that it was proud of its work in the case, CBS News reports, other than the fingerprint error.

"If a similar investigation was being conducted, and we were provided a fingerprint identification, we would do exactly what we did in the case of Mr. Mayfield," said agent Robert Jordan.

Two internal Justice investigations cleared the FBI and prosecutors of wrongdoing, said Scolinos. A December 2005 review of the matter by the department's Office of Professional Responsibility found that federal prosecutors who handled the investigation acted appropriately.

A month later, Justice Inspector General Glenn A. Fine concluded Mayfield's faith was not the reason the FBI began its investigation, and that the agency did not misuse provisions of the USA Patriot Act.

Mayfield was arrested in May 2004 on the basis of a fingerprint found on a bag of detonators in Madrid that was mistakenly matched to him after the March 11, 2004 train bombings that killed 191 people and wounded more than 1,500. Mayfield was jailed on a material witness warrant but was released after the FBI acknowledged the fingerprint was not his.

The government acknowledged in the settlement that it "performed covert physical searches of the Mayfield home and law office, and it also conducted electronic surveillance targeting Mr. Mayfield at both his home and law office," according to a news release from Mayfield's attorney, Elden Rosenthal.

The settlement allows Mayfield to continue to pursue his challenge of the USA Patriot Act, Rosenthal said. Mayfield claims the act violates the Fourth Amendment because it allows government searches without probable cause that a crime has been committed.

"The Patriot Act is decidedly not patriotic," Rosenthal said. "We will vigorously pursue this constitutional challenge to the highest courts in the country."