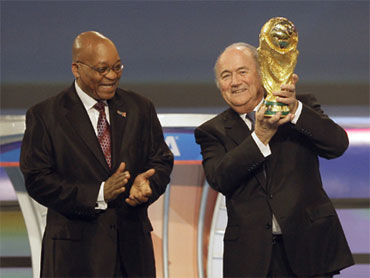 The United States will face England at the World Cup for the first since a famous upset 60 years ago, then play Slovenia and Algeria in the first round of next year's tournament.

The U.S. opens against England in Rustenburg on June 12, the teams' first World Cup matchup since the Americans' 1-0 victory at the 1950 tournament in Brazil.

The United States then meets Slovenia at Johannesburg's Ellis Park on June 18 and completes the first round on June 23 against Algeria in Pretoria. The U.S. has never played either nation.

"This is the best draw we've ever had in any World Cup," said former U.S. forward Eric Wynalda, now an analyst for the Fox Soccer Channel. "No disrespect to England, but this is an ideal group for us."

"It will be like a Premier League game," Fulham manager Roy Hodgson said. "The USA is like a team you meet every week. It's better than meeting North Korea and a style of play you're not used to."

The game could feature a matchup of Los Angeles Galaxy teammates Landon Donovan playing for the U.S. against England midfielder David Beckham. Donovan shrugged his shoulders when the U.S. was picked to play England. "It never ends," he said — apparent reference to his connection to the English star.

The U.S. has beaten England twice and lost seven times in nine meetings. The other victory was 2-0 in a 1993 exhibition at Foxborough, Mass. In the most recent matchups, England won 2-1 at Chicago's Solider Field in 2005 and 2-0 at Wembley last year.

The only official match between the teams was at the 1950 World Cup.

"It's a tough game," former England manager Terry Venables said. "They will be very well organized and very fit. They won't outplay us but they could out-strength us.

"They won't give in until the last but we do have a bit more."

Mexico was drawn Friday to meet South Africa in the tournament opener on June 11 in Johannesburg. El Tri then plays France and Uruguay in Group A.

In the other groups it was: